The Election Goes O.C.: Control Of The House Could Come Down To Orange County

Alicia Delgado lives in a working-class neighborhood on the west side of Costa Mesa, just a few miles inland from the wealthy Orange County community of Newport Beach. She decided to hold a garage sale on a recent Friday morning, with clothes, Halloween decorations and knick-knacks on display in her driveway.

She pointed to a huge campaign sign on her gate that read Harley Rouda for Congress. He’s the Democrat running in District 48 against 30-year Republican Congressman Dana Rohrabacher.

“In this house, everybody is Democrat,” the 49-year-old said.

She won’t vote Republican because of President Donald Trump. “The president is … a bad person,” she said, laughed, then explained that she wants to get more Democrats into Congress to counter the president’s agenda.

Whether Democrats or Republicans control the House of Representatives after the election could come down to voters like Delgado, who lives in one of several O.C. districts where the races are neck-and-neck.

“We’re talking a thousand or so votes could swing the election,” said Mike Madrid, a Republican political consultant.

As we head into the final days before the election, Democrats and Republicans are fighting hard for control of the House. President Trump said he may not be on the ballot, but his agenda is on the line. Meanwhile, Democrats are thirsty to take control of House committees in charge of investigating the president.

“If you’re gonna see Democrats pick up those 23 seats, Democrats think they’ve got to get, if not all of these [Orange County] seats, most of them,” said Domenico Montanaro, lead politics editor at NPR.

In order to flip these seats, Democrats need to do three things, according to Madrid. First: turn out their Democratic base — which appears to be going well.

The other two will be heavy lifts: motivating minority groups to go to the polls in record numbers, and convincing some Republicans to vote against their own party.

We’re going to look into those two harder challenges for Democrats trying to flip a once deep-red area.

Hear the full Keys to the House episode on how growing diversity could boost Democratic efforts to win the House of Representatives — but only if more Latinos and Asians vote.

Orange County has long been a Republican stronghold, but the region is changing. The demographics have shifted, and so has the voting base.

Delgado’s neighborhood in Costa Mesa is one of many communities that has transformed.

“When this housing was built 30, 40, 50 years ago, this was an overwhelmingly white area, blue collar of course,” Madrid said. “It's where Orange County built its reputation as kind of the home of Republicanism.”

The county’s proportion of registered Republicans has shrunk dramatically in the past couple decades — from nearly 50 percent in 2000 to just 34 percent today. Back then, about half of the county was white. Now, it’s down to 40 percent.

Meanwhile, Latino and Asian populations have grown. Together, they now make up more than half the O.C. population.

“You're seeing very diverse communities from different Asian and Latin American countries — both of which have a very high propensity to vote for Democratic officials,” Madrid said.

More and more voters are registering as Democrat and “Decline to State.” They now each make up about a third of the county’s registered voters. Independent voters are more likely to vote Democrat than Republican. The growing Latino and Asian populations in the area could be a good thing for Democrats,  if they can encourage enough of their supporters to go to the polls.

There was a mix of responses from people in Delgado’s neighborhood. Some said they are going to vote for their member of Congress and know exactly who they are voting for. Others, like 18-year-old Veronica Martinez, said she’s just not sure.

“I’m just not really that into politics or stuff like that,” Martinez said as she was walking to her job at a tanning salon.

She said she may vote for city council because her brother is working on one of the campaigns, but Congress wasn’t really on her mind.

Hear the full Keys to the House episode on how Democrats would need to convince Republicans disgusted with the president to kick their party out of power.

Another group that Democrats need to appeal to is Republicans who don’t like Trump.

On a mid-October morning in Mission Viejo, an upscale suburb in southern Orange County, Trish Kelley started what she calls her daily routine of going door-to-door for Mimi Walters, one of the nation’s most vulnerable congressional Republicans.

The Republican congresswoman is in a tough race in District 45 against Democratic challenger Katie Porter.

Kelley walked up to the door of Mary Moorhead, a 64-year-old grandmother who raised six kids.

“I didn’t vote for Trump, but I actually have not been dissatisfied with a lot of the things that I think he’s accomplishing,” Moorhead said. “So, I would vote for him. … And I would vote for Mimi either way.”

Some Republican voters are happy with the president and happy with their party. Others, like 80-year-old Gary Montgomery, are defecting.

“Trump is far worse than I ever thought he was going to be, tell you the truth,” Montgomery said.

He changed his registration from Republican to “No Party Preference” a couple years ago and — for the first time in his life — did not vote for anyone for president.

“I know one thing for sure. I will not vote for any Republican that’s on the Trump bandwagon, which is most of them,” he said.

The whole reason Democrats think they can win some of these seats that Republicans have held for years is these districts all voted for Hillary Clinton in 2016. But they also elected Republican members of Congress. In Walters’ district, Trump got 44 percent of the vote. Walters won 59 percent, which is a 15-point difference. That gap was slightly smaller in Rohrabacher’s district, about 12 points, because Trump did a little better there.

Who are the candidates running in these three swing districts? It could be a the start of a joke: “A lottery winner, a law professor and a businessman walk into a bar …”

Actually, those are the Democratic candidates hoping to flip California’s competitive congressional races on Tuesday.

They’re up against two Republican House members and a longtime staffer to a third.

Around the back of an Irish pub in working-class Costa Mesa, just a few miles from the coast, you’ll find a neon sign that reads, “Rohrabacher. Liberty Headquarters.”

Upstairs is a time warp back into Republican Congressman Dana Rohrabacher’s rich political career — and a built-in bar complete with a beer keg. He calls it his Liberty Bar. 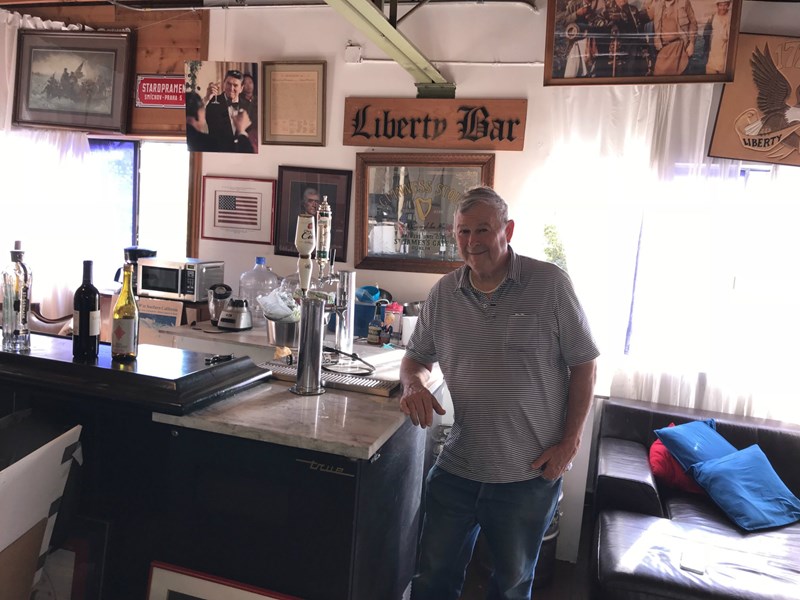 “We like to pride ourselves that we are having our own freedom revolution here,” Rohrabacher said, “in the same way our founding fathers started the American Revolution above the pub.”

Rohrabacher has taken sharp criticisms for his ties to Russia, but he’s had enough of that talk. He says that, as chairperson of a House subcommittee tasked with overseeing that country, it’s his job to have conversations with Russians.

“The news media presents this as something that’s sinister,” he said. “I will tell you right now that my constituents know me, and they know that I am a patriot down to my soul.”

Asked why he’s running for another term after 30 years in Congress, he says he has one main goal: help build “the next generation of nuclear power,” which he says will “produce electricity in the future and leave a minimal amount of radioactivity behind.”

His Democratic opponent, businessman Harley Rouda, calls the congressman out of touch.

“The corruption is so evident that people are seeing that he is similar to Donald Trump in how he conducts himself,” he said.

Rouda is a former Republican who says he is “absolutely” a moderate Democrat. He argues he’s a better fit for this wealthy, coastal district.

'I Don't Believe That Human Beings Are Causing Climate Change'

Congressman Dana Rohrabacher says he believes climate change is real — but it's a natural process, and climate scientists are just trying to control American lives.

“The Republican party has moved so far to the right that a lot of Republicans don’t believe it’s the Republican Party that they’re accustomed to,” he said.

There’s a more liberal Democratic challenger in the congressional district to the east.

UC Irvine law professor Katie Porter backs Medicare-for-All and says voters are fed up with Republican Mimi Walters, who voted for the GOP tax plan and to repeal the Affordable Care Act.

“It was a repeal with no replacement, and they’re concerned that Mimi Walters would support something like that,” Porter said. “They’re concerned about the direction Donald Trump’s taking this country, and they want some checks and balances.”

Walters, a two-term congresswoman who’s close to House Majority Leader Kevin McCarthy of Bakersfield, is a much more conventional Republican than Rohrabacher. Her core message is all about economic policies that matter to her suburban constituents.

“We have a choice here,” Walters said in a recent Fox News interview. “Either we can move this country forward, or go back to the Obama era, and the regulations and high government regulation, high taxes.”

And in Northern Orange County, former Assemblywoman Young Kim is running to replace her former boss, retiring GOP Congressman Ed Royce — and to become the first Korean-American woman in the House. 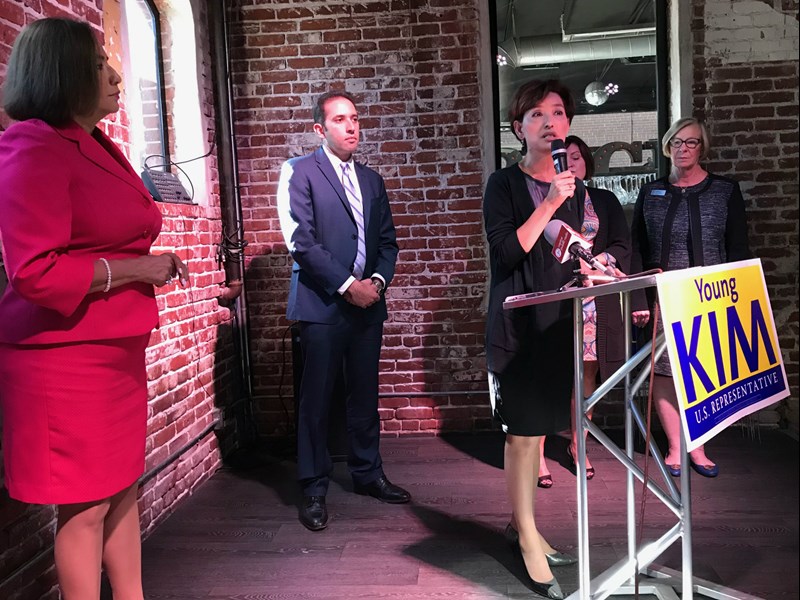 Republican state Assemblywoman Young Kim accepts an endorsement from the US Chamber of Commerce. She's facing off against Democratic lottery-winner-turned philanthropist Gil Cisneros in California's 39th district, being vacated by Rep. Ed Royce.

She’s campaigning more as pro-business than pro-Trump. She backs free trade. And, on another of the president’s signature issues: “My community and our nation expect someone like me to bring a different voice to bring a different perspective in how we deal with these issues like immigration,” she said.

She’s up against Democrat Gil Cisneros, a Navy veteran and lottery winner who — like Rouda —  is also a former Republican. Asked about Medicare-for-All, he instead says he’ll fight to protect the Affordable Care Act. And — again, like Rouda — he feels the GOP left him.

“All the issues I believe in, I believed in then and I believe in now – like common sense gun legislation, immigration reform, supporting health care,” he said in a recent interview on KPCC’s Airtalk.

Three districts. Three very different sets of candidates. And three extremely tight races that could hold the Keys to the House.

'Disability rights are workers’ rights': Disabled UC Davis workers on strike advocate for greater accessibility on the picket and in the university

Yosemite plans to drop its reservation system in summer 2023