Take A Ride Through Yosemite Valley… On A Green Dragon

People travel from all over the world to witness the epic views of Yosemite Valley — and many tourists check out the region by riding a green dragon.

“We do ask that you keep your arms and legs inside the trams at all times,” said Ranger Carol Lambrecht guiding the tour, which she leads in an open-air, flatbed truck.

Yosemite Valley is a busy place with traffic that often rivals the state’s most bustling city, Los Angeles. It’s the place in the park where around 95 percent of the four million yearly visitors go.

“I am going to try and balance this tour with a little geology, a little history, a dash of flora and fauna,” Carol explained during a recent ride through the Valley.

One of the first things we saw was a rock that I’ve stared at for two decades: El Capitan. “Now it rises above the Valley floor about 3,200 feet,” Carol said. “And geologists tell us it goes below the ground just as far as it goes above ground.”

El Capitan is one of the most popular climbing spots in the park. One person even climbed it without any ropes, which is super dangerous. 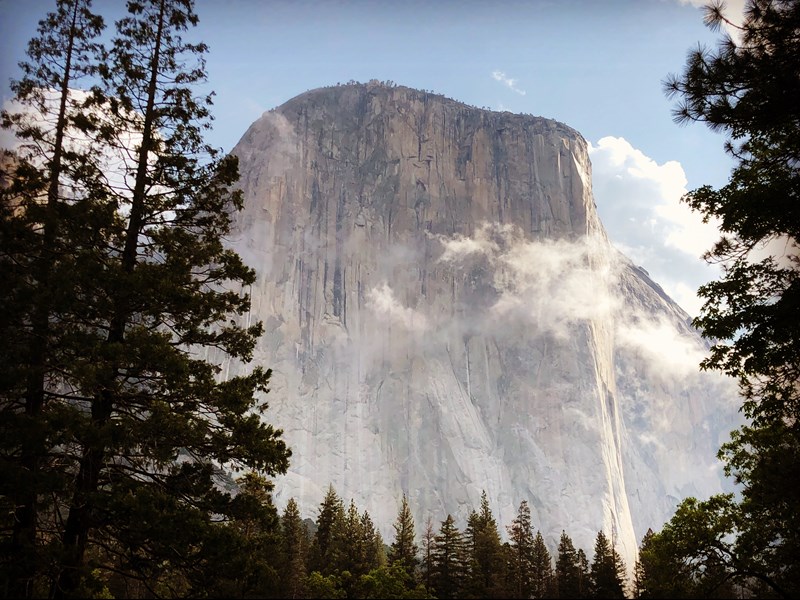 El Capitan is one of the most iconic sights in Yosemite. It's also a favorite spot among rock climbers in the park.Ezra Romero / Capital Public Radio

Later, Carol took us to my favorite view. It’s almost prehistoric, with sharp cliffs and waterfalls. “This is Tunnel View, and I hope you like it too because we're going to be here for 10 minutes,” Carol said.

As we got back on the bus, someone asked Carol why popular places in Yosemite here have new names? For example, The Ahwahnee Hotel is now called The Majestic Yosemite Hotel.

When the park got a new concessionaire in 2016, the names changed. Turns out, the previous one had trademarked them. There's an effort to get the historical names back, and Yosemite’s Public Information Officer Scott Gediman says litigation is ongoing.

“We certainly have every intention of having the names restored,” Gediman said. “We feel that these names are iconic names that go with iconic places.” 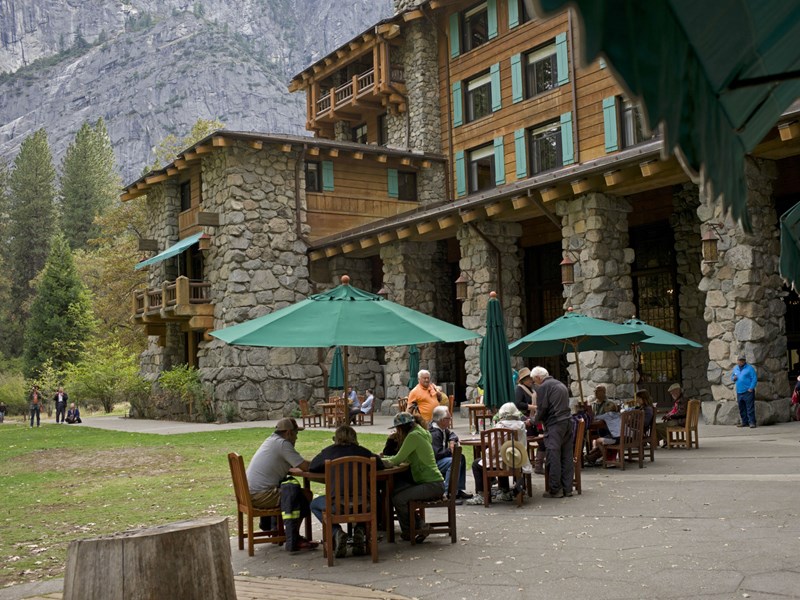 In this Oct. 24, 2015, file photo, people dine outside the former Ahwahnee hotel in Yosemite National Park. The hotel was renamed the Majestic Yosemite Hotel after a trademark dispute in 2016.AP Photo/Ben Margot

Back on the tour, inching toward Half Dome Village, Carol pointed to giant boulders.

“Any time you see white boulders on the Valley floor you can usually look up and see a white patch amidst a grey cliff you know that's a more recent rock slide,” Carol said.

This is also called a rock fall. It’s park geologist Greg Stock’s job to monitor them.

“There's rarely a week that goes by that I don't get a report of a rockfall,” Greg said.

He says there’s a lot that isn’t understood about how they happen. Greg has an idea, though: like rain seeping into cracks, widening them, and hot days expanding the rock. In 2017, eight rock falls happened in two days. 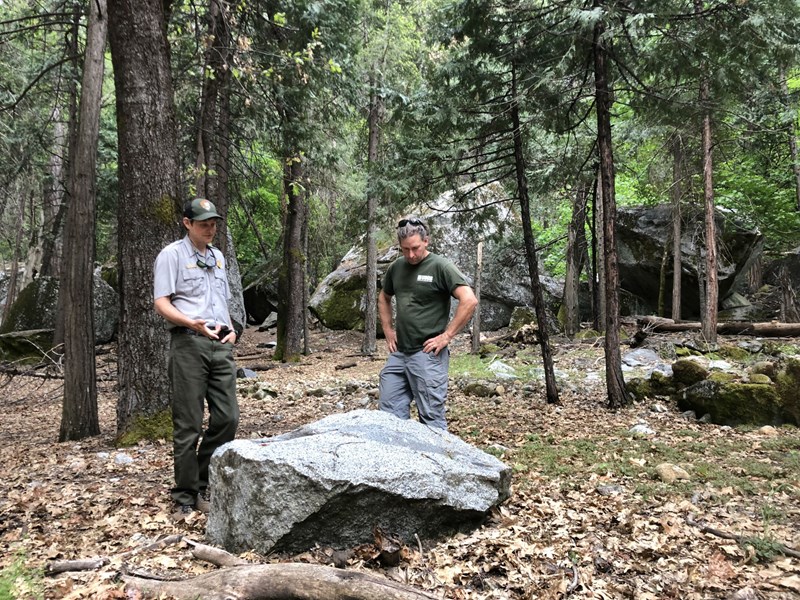 Yosemite National Park geologist Greg Stock (left) and the USGS's Brian Collins work together to monitor rock falls in Yosemite. This rock fell on the foundation of a cabin that had been moved due to the threat of rock falls.Ezra David Romero / Capital Public Radio

“The weather was warm and clear,” Greg said. “The first rockfall was a few hundred cubic meters in size, a cubic meter being about the size of a washing machine. So, think about four five hundred washing machines falling all at once.”

Six more happened over the next few hours. One person died. The next day, a rockfall 20 times the first fell in the same area.

In 2013, Greg says the park removed cabins from Half Dome Village to keep people out of the way of rock falls. The next year a washing machine sized rock fell right where a cabin once was.

If the cabin hadn't been closed and removed it would have come right through the roof of a cabin in the middle of the night with people sleeping in it most likely,” Greg said.

Back on the green dragon, the tour was about to end. The trip made me realize there’s so much I don’t know about this place that is always changing. And that visiting here, despite all the traffic, is totally worth it.

“I have to tell you have been a dynamite audience and I really appreciate it,” Carol said.