It was just over a year ago that the emergency spillway at Oroville Dam nearly failed, threatening hundreds of thousands of lives. Today, crews continue to work daily to fix the damage. But it wasn’t just people and homes in danger.

As the emergency spillway eroded, it became clear to officials that the rushing water was poised to knock over giant electric towers.

“That would of been really damaging because its our main way of utilizing Hyatt Power Plant as well as our main control to operate the gates of the main spillway to release water,” said Erin Mellon with California Department of Water Resources.

Workers temporarily re-routed the towers that cut across the spillway’s bank. But months later, when workers were considering a permanent reroute, a new problem arose: a 6-foot by 6-foot bald eagle nest in a tree.

Crews are working weekly to repair the dam after the emergency spillway nearly failed in 2017 threatening hundreds of thousands of lives. Ezra David Romero/Capital Public Radio

There was fear among workers that the nest was in danger, because the tree could fall and damage the new power lines. To save the birds’ home, they had to do something.

Adding to the challenge was the fact that bald eagles, while on the rebound in California, were very recently endangered.

The species majorly declined because of a World War II-era pesticide called DDT, which is used to control mosquitos. Carrie Battistone with the California Department of Fish and Wildlife says that as DDT worked its way into the food chain, it thinned the shells of bald eagle eggs.

“They would sit on the nests, but the egg shells would be so thin that they’d end up breaking them at some point in incubation,” Battistone says. “That caused the populations to decline.”

She says that as a result, bald eagles were added to both the Federal and California lists of endangered species in the late ’60s and early ’70s. When DDT was banned from most uses nationwide in 1972, it was a game-changer for the species.

In 1977, bald eagles could only be found nesting in eight of California’s 58 counties. Today that number has grown to 41. 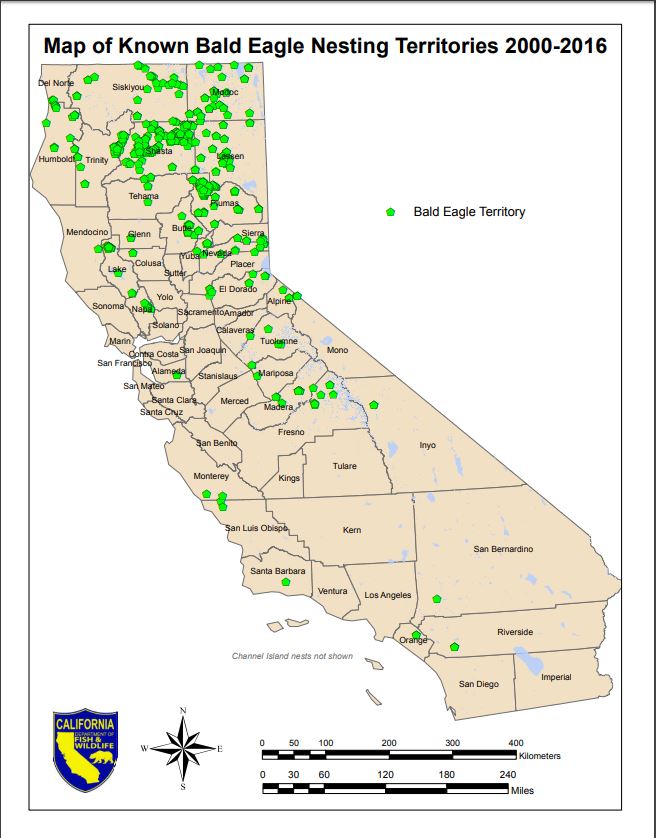 Bald eagles were removed from the federal endangered species list in 2007. Part of the rebound is attributable to the birds’ majestic looks.

“The bald eagle was able to capture the attention, in some ways that we wouldn’t see with the golden eagle, even though it is a very magnificent bird. It doesn’t have the same PR appeal,” is how Michael Lines with Audubon California put it. “What a shame it would seem to have our national bird spiraling down toward extinction.”

At the Oroville Dam last September, DWR workers eventually removed the bald eagles’ 1,000-pound nest out of the pine tree near the tower. They thought they’d put it in another tree. But that ended up too big of a job. That’s when environmental chief Ryan Martin’s team had an idea.

“We went about the mitigation by actually creating some artificial nest baskets,” Martin recalled. “Basically, a three- to four-foot hoop structure and we used some of the nest material to kind of augment that.” 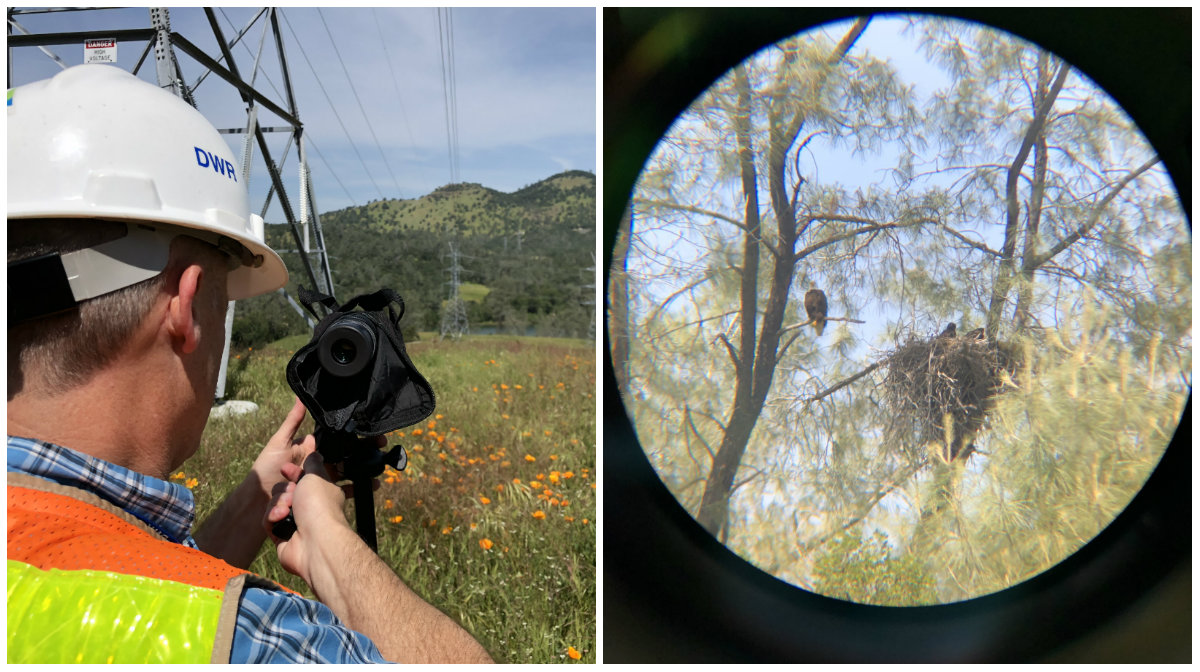 DWR Scientist Ryan Martin is using a telescope to point out where the bald eagles rebuilt their nest. They are raising two hatchlings. Ezra David Romero / Capital Public Radio

The giant birds didn’t like the fake nests, though. Instead, a couple hundred feet away, they found a big tree with a strong branch. Martin says since bald eagles aren’t tagged in this region he isn’t totally sure they are the same birds, but he says it’s likely. Today, in the new nest the birds are raising two fledglings.

Martin pointed out their new home through a telescope. “One of the adults is perched there in the limb adjacent to the nest. The two nestlings are hunkered down, kind of in the nest itself,” Martin said. “They’re getting their flight feathers.”

Martin’s glad the birds chose to stay in the area. He’s witnessed the population of bald eagles grow around the lake from between four to seven year-round couples and more than 130 migratory birds during the winter.

Correction: A previous version of this story mischaracterized the severity of the Oroville Dam crisis. The emergency spillway nearly failed in February 2017.