Nowadays, the Rodgers and Hammerstein classic “South Pacific” is often marketed as nostalgic fare. A rose-tinted retrospective on World War II, with Navy men — and women — stationed on an exotic island, where several of them fall in love.

Community Asian Theater of the Sierra is reviving the classic musical, but the show by the region’s only Asian American theater group raises points that were surely important to Rodgers and Hammerstein when they wrote the show nearly 70 years ago.

From the viewpoint of 2018, the way the guys express their romantic intent is cute, in a decidedly antiquated sort of way, singing loudly a phrase that dropped out of common usage more than 50 years ago, “There ain’t nothing like a dame….”

Our terms of endearment have changed, but it’s love, rather than war, that drives this show’s plot. There are two overlapping romances involving white Americans who fall in love with someone who is not American.

Nurse Nellie Forbush is swept off her feet by a dapper French plantation owner, but she abruptly breaks it off when she realizes that the Frenchman had previously married a now-deceased Polynesian, and he’s now raising two mixed race children. And Lt. Joseph Cable falls head-over-heels in love with a Polynesian beauty named Liat — but then backs off, insisting that he couldn’t possibly marry her.

To understand just how much race complicates romance in “South Pacific,” you have to remember that during World War II interracial marriage was very much against the law in California, and many other states as well. When Rodgers and Hammerstein visited California in 1948 to size up actress Mary Martin for the female lead in “South Pacific,” the California Supreme Court was hearing a case in which the County Clerk of Los Angeles had denied a marriage license to a Mexican-American woman and an African-American man, both employed in the defense industry. This case was front page news, and the California Supreme Court struck down an interracial marriage ban with a celebrated decision in October 1948.

CATS has not made alterations to the show. But their production shifts the emphasis onto the interior struggles that Nurse Forbush and Lt. Cable face as they grapple with their beliefs about love and marriage and family. And as a result, Lt. Cable’s big song after intermission – “You’ve Got to be Carefully Taught” – looks at racial attitudes inculcated in youth, and in this production, it connects with a lot more impact than usual.

“You’ve got to be taught to be afraid, of people whose eyes are oddly made, and people’s whose skin is a different shade… you’ve got to be carefully taught…”

When this song becomes as the pivot point of the second act, as it does here, the overlapping love stories make a lot more sense, and the show becomes more powerful and compelling. 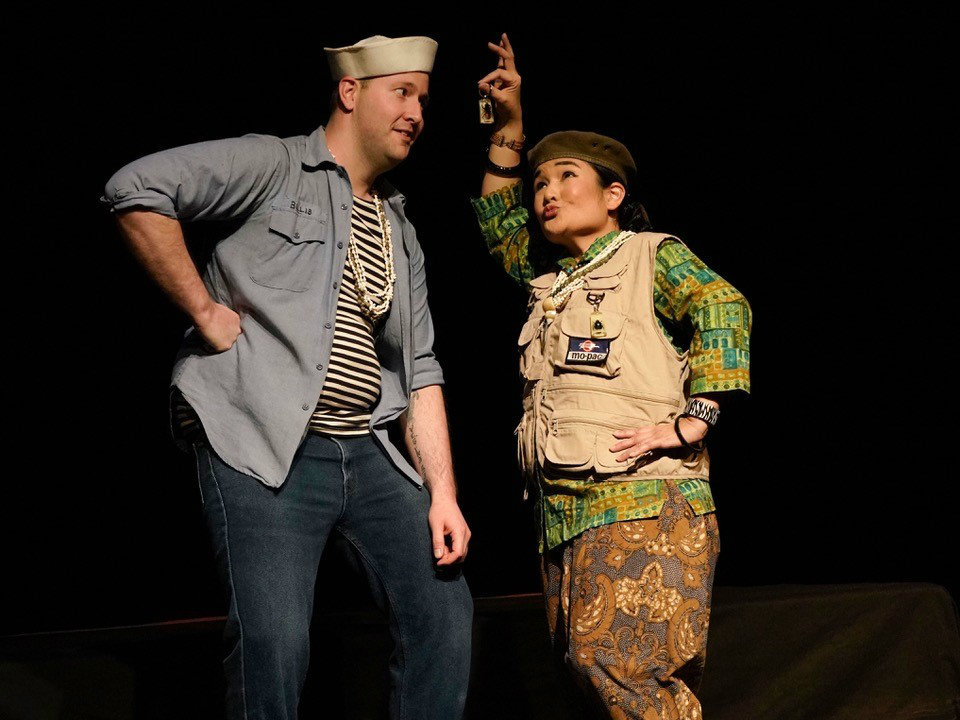 Micah Cone as Luther Billis and Bernadette Garcia as Bloody Mary in the Community Asian Theater of the Sierra's production of "South Pacific." David Wong / Courtesy

I have been reviewing CATS productions for 20 years — shows in which characters have asked who they really are, where they really belong, and who is an appropriate marriage partner. And until how, these questions involved immigrants coming to America, and building a new life.

But in this CATS production of “South Pacific,” the shoe is on the other foot, as white Americans go out into an unfamiliar world and find romance is shaking up their long-held assumptions. This interior conflict made “South Pacific” dramatically compelling back in 1949, and when the show is done this way, this venerable Broadway chestnut remains dramatically compelling today. Hats off to CATS for doing “South Pacific” stylishly, in the manner that Rodgers and Hammerstein clearly intended, 70 years ago.

The CATS production of “South Pacific” continues at the Nevada Theatre in Nevada City through May 5. Reservations recommended, some performances are sold out.