Authorities announced Wednesday the arrest of a suspect in the case of the Golden State Killer, also known as the East Area Rapist, connected to at least 12 murders and 45 rapes in the 1970s and 1980s, more than half of which occured in the Sacramento region.

“The answer has always been in Sacramento,” said Sacramento District Attorney Anne Marie Schubert. “We all knew we were looking for a needle in haystack, but we also knew the needle was there.”

Joseph James DeAngelo, 72, a former Auburn police officer, was arrested Tuesday at his Citrus Heights home on two counts of murder, for the murders of Brian and Katie Maggiore. The couple was murdered while on a walk in their Rancho Cordova neighborhood in 1978.

Schubert said the department renewed its efforts to solve the case in 2016 on the 40th anniversary since the string of rapes and murders began.

Sacramento County Sheriff Scott Jones says DNA with some of the same characteristics as the suspect’s came to light six days ago. He wouldn’t say how the new evidence was acquired.

“It was DNA that was related. That’s all I can say,” Jones said. “I can’t say it’s a family member’s DNA. I can say there was, in employing this technology, there was a link between the DNA that we had and the potential for examining a universe of folks of which our guy was a member.”

Jones said dozens of people with similar DNA characteristics were eliminated as suspects as investigators got closer to DeAngelo. A stakeout was ordered and DNA was collected from DeAngelo without his knowledge, but that sample failed to provide a match of enough markers to positively tie him to the crimes of which evidence is available.

Investigators then secured a second sample which gave them enough components that were consistent with what they were looking for.

“We were able to confirm what we thought we already knew, that we had our man,” Jones said.

He added that the source of the DNA link would come out “soon enough.”

He also said reports that a tip or tips led to DeAngelo’s arrest were false.

Bruce Harrington's brother Keith and sister-in-law Patty were killed in 1980.

"To the entire reservoir of victims out there, my sadness is with you,” Harrington said at the announcement. “For the 51 ladies who were brutally raped in this crime scene, sleep better tonight. He isn't coming through the window. He's now in jail and he's history."

A suspect has been arrested in the case of the a serial killer who investigators believe raped 45 women and murdered 12 people in the 1970s and 1980s, known as the East Area Rapist or Golden State Killer.

DeAngelo was wanted on a Ventura County arrest warrant and is being held without bail.

The Sacramento County assessor’s office confirmed that the home where the FBI and law enforcement apprehended a suspect on Tuesday evening has been owned by the Joseph James DeAngelo Revocable Trust since 1993.

Megan Bill lives on the same Citrus Heights block as the suspect. “Just the thought of living next to someone who’s killed 12 people and raped 45 victims, that people know of, it’s just weird to think about it, it’s scary, it’s crazy,” she said.

Capital Public Radio spoke to Charlotte Bailey near DeAngelo’s home on Wednesday morning. She recalled how she bought a house in Fair Oaks in 1976 at age 21, when she started hearing about the East Area rapist on the news.

“I got petrified, I mean literally petrified,” Bailey remembered. “He was hitting all around where I lived.

“It was just devastating. My girlfriend and I wanted our husbands to put boards on the garage doors and the windows. You just didn’t feel safe.”

Her home is about seven minutes from the house where the suspect was arrested. “I’m shaking ever since I found out, and to know that he was so close,” she said. 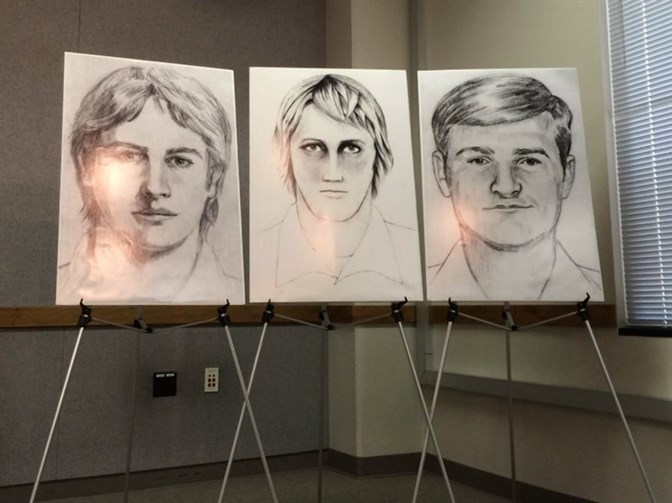 The FBI had previously released these sketches of the suspect known as the East Area Rapist and Golden State Killer.

The FBI offered a $50,000 reward for information leading to the identity of the killer in 2016.

The suspect often tied up his sexual assault victims and their spouses and stole jewelry and coins from the home. He was also known to place dinner plates on the tied-up family of victims before committing the rapes.

This is a developing story. We will provide updates as more information becomes available.
The Associated Press contributed to this report.
Follow us for more stories like this