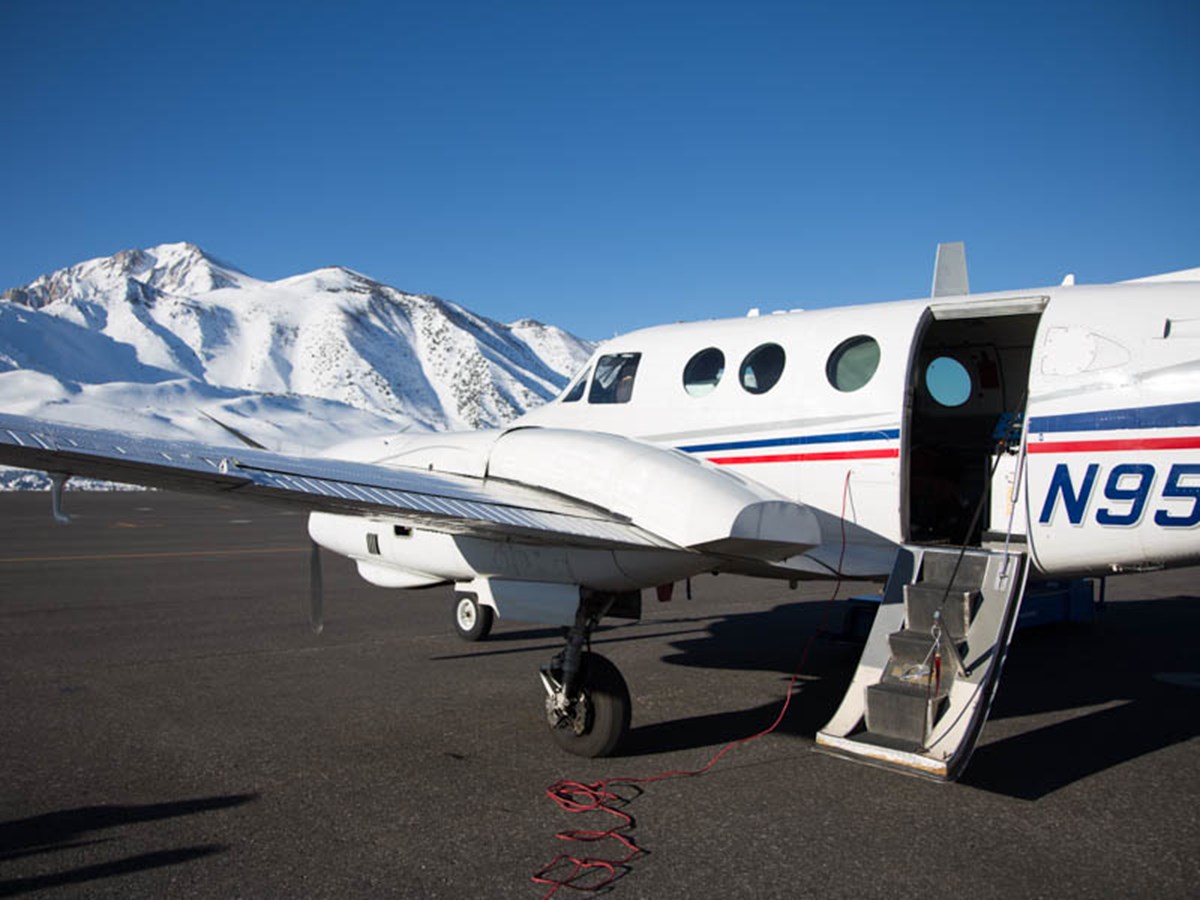 Frank Gehrke trudges through snow and ice, as he’s done for nearly four decades in the Sierra Nevada. He’s one of many state workers who takes monthly snow surveys, in the same spots, to figure out how much water is in the snowpack. And this old-fashioned way of measuring the snowpack is quite laborsome.

First, surveyors strap on snowshoes — if there is even enough snow on the ground to schlep through — hike in and then follow a designated course. This path’s starting point is marked by an orange sign on a pine tree.

“We basically measure snow courses with a set of hollow aluminum tubes that are generally about 30 inches long,” Gehrke explained as he unwrapped the tubes from a canvas backpack along a course off Highway 50 that heads toward Lake Tahoe.

Gehrke hands me a tape measure and walks 25 feet in the direction of another marked tree. He says he’d much rather operate snowcourses like this than sit in meetings about water policy, which he does often. He pierces the snow with the hollow tube. As he pulls it out, makes an announcement: “A little less than 14 inches.” 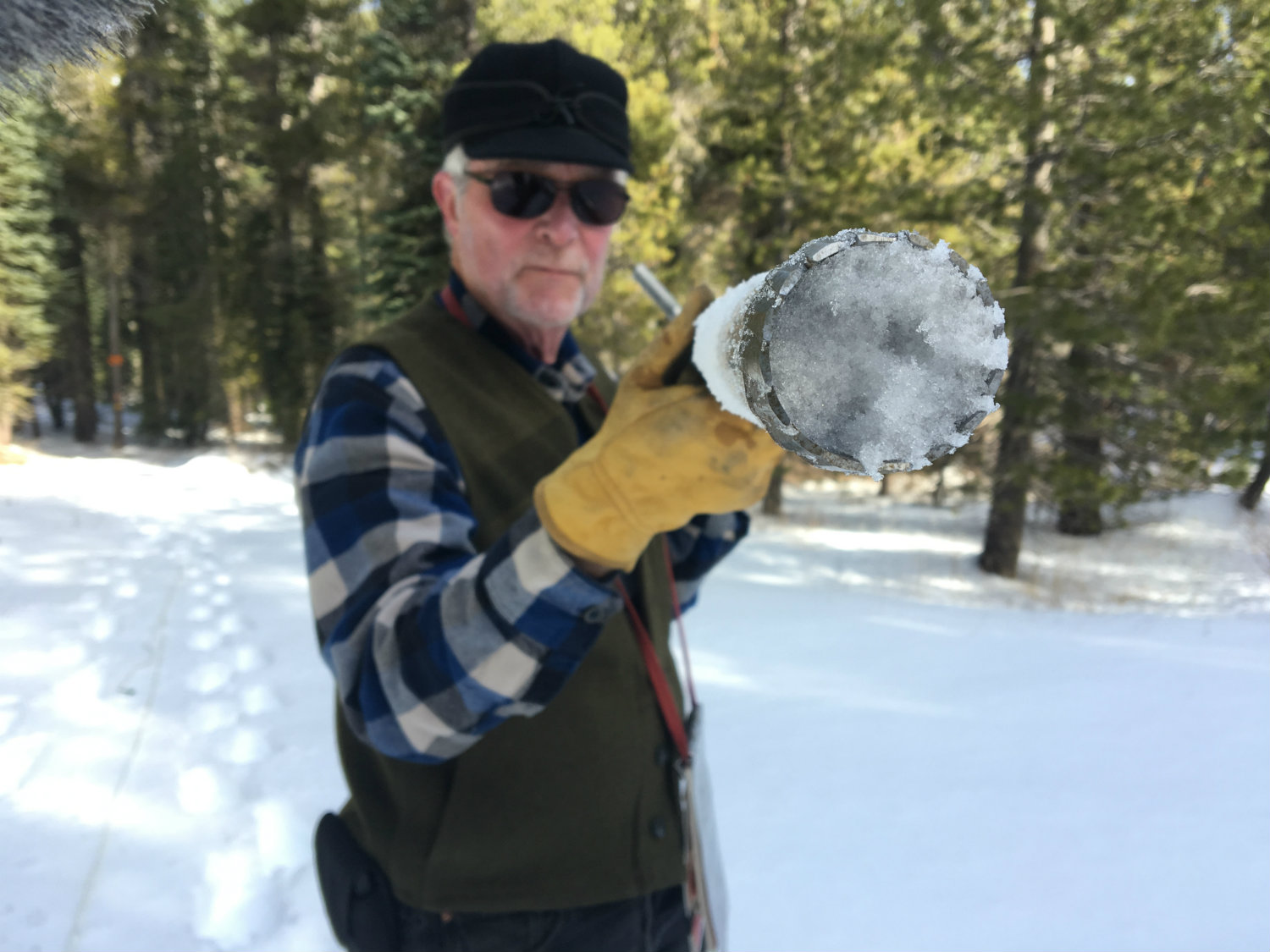 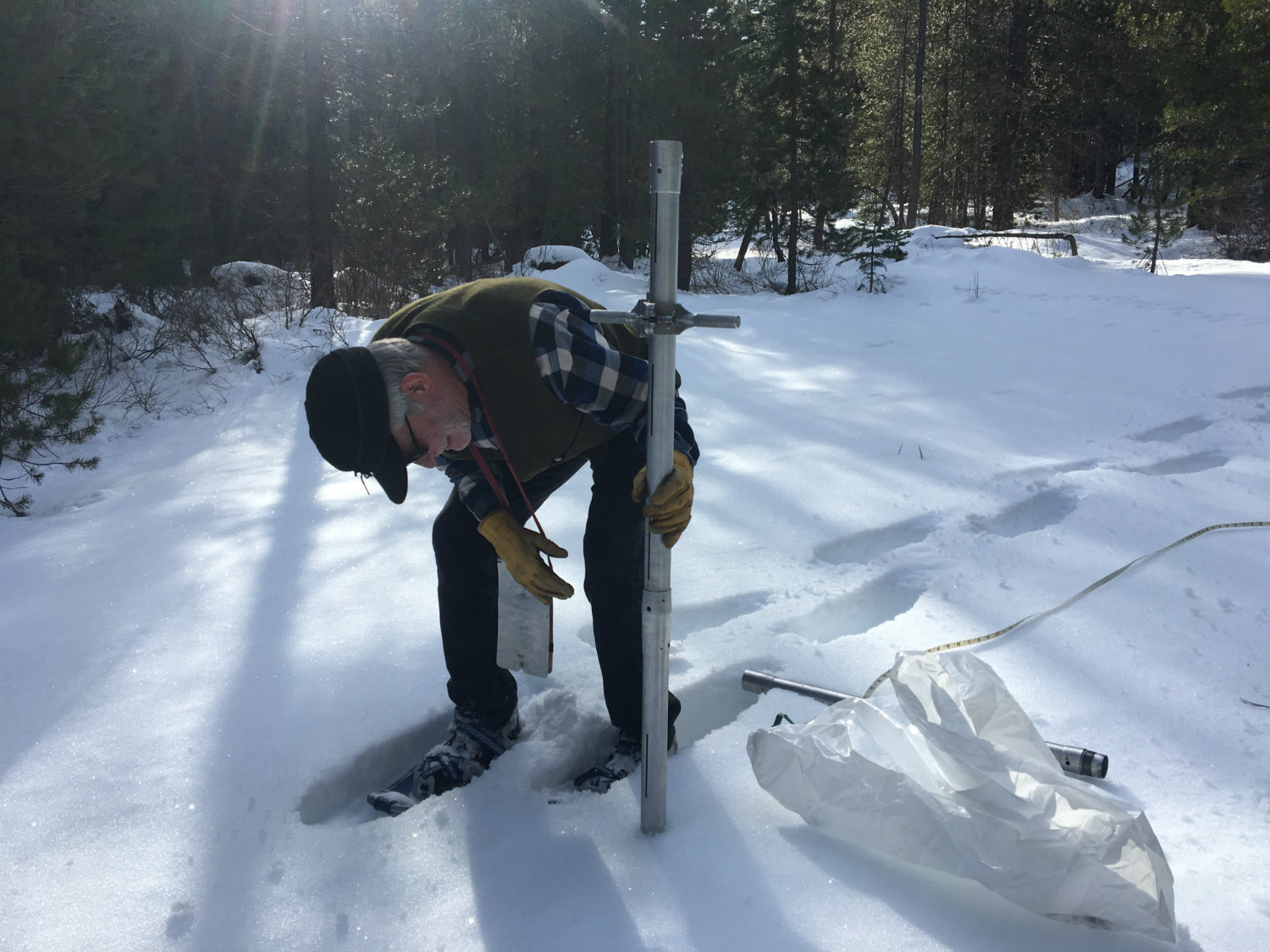 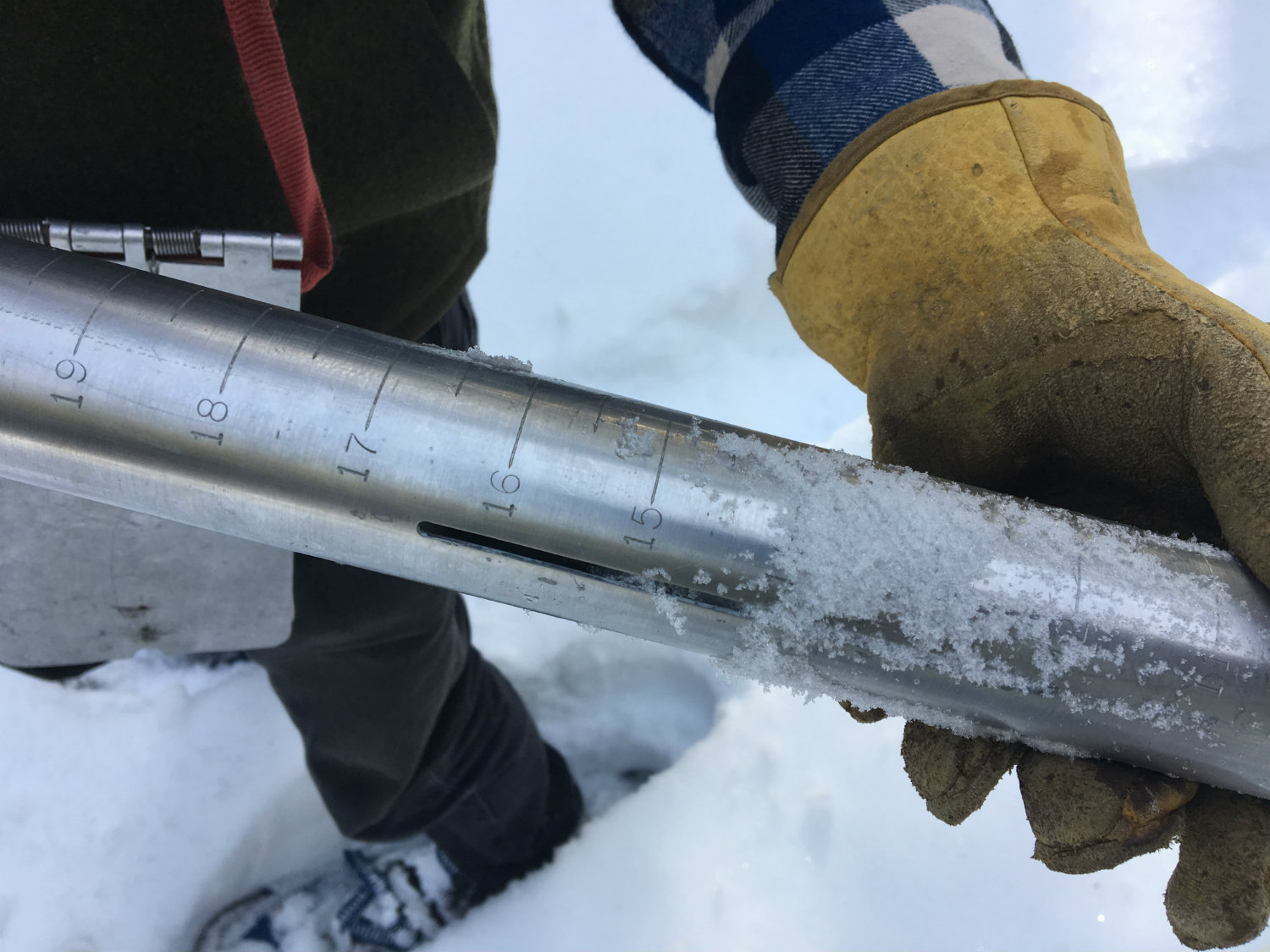 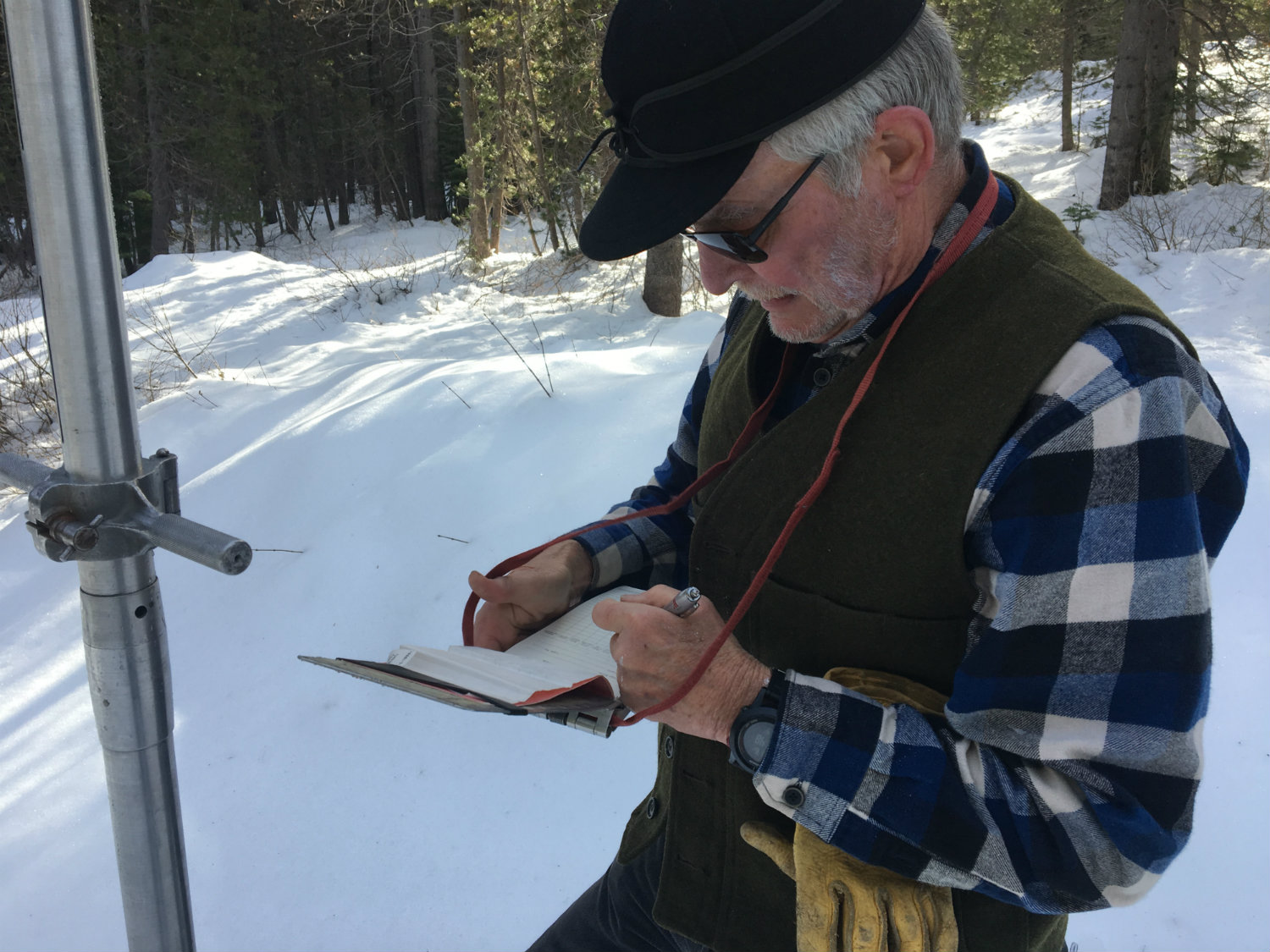 Frank Gehrke’s conducted hundreds of snow surveys across the Sierra. It all starts with a measuring tape, a hollow aluminum tube and a scale. Once surveyors measure each distance they pierce the snow with the tube and then weigh the snow collected. The water content in the samples are measured by the depth of snow divided by its density. The process is repeated until the course is over. Ezra David Romero / Capital Public Radio

This entire course ended up averaging about 1 inch of water content, which is very low for early February. It jumped to 9 inches after the big snowfall in the first week of March, however.

The data from surveys and a system of around 150 sensors informs local and state officials how much water is stored in the Sierra. But there’s a flaw: Measurements can be up to 40 percent off.

That’s because — obviously — the level of snow isn’t the same across the mountain range. “You could be standing on six feet of snow and 10 feet away it’s bare ground,” said Gehrke, recollecting hundreds of surveys he’s conducted.

In dry, warm years like 2018, snow sensors often don’t work because they’re covered in thick layers of ice as snow melts and freezes. The development of these layers is a process called “bridging,” which has gotten worse over the past 10 years, the Department of Water Resources reports, due to late snowfall in seasons like this and warm temperatures.

That’s why Gehrke is stoked about a new way to measure the snowpack from the sky. 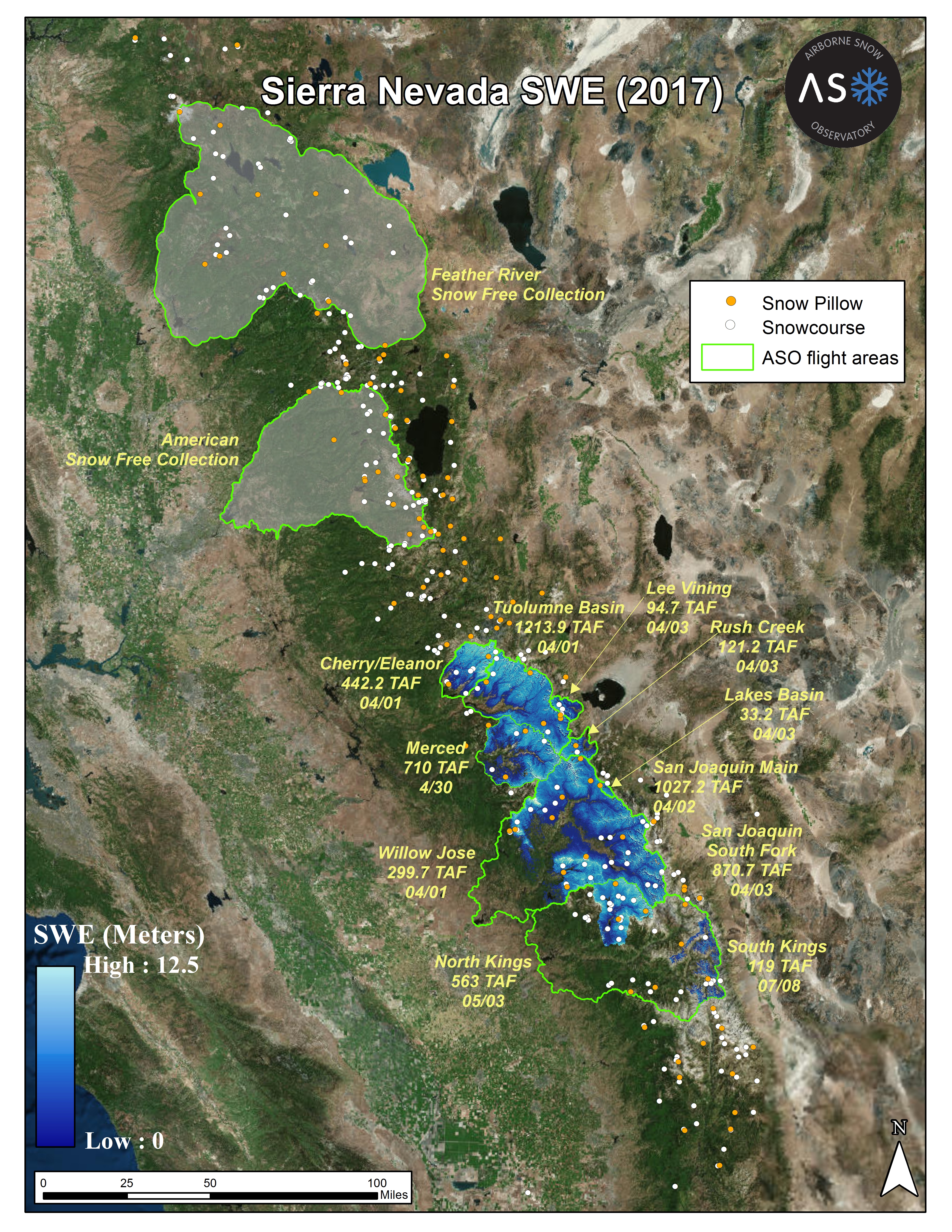 This map shows the basins that NASA's Aerial Snow Observatory currently flies over. The blue and white hues show depth for nearly all the snow in the basins compared to the averages taken through snow surveys and sensors (represented by the circles). NASA’s Jet Propulsion Laboratory / Courtesy

This new approach has the potential to map the snow with a very small margin of error, which is important because — in a state where drought and heat waves are increasingly common — every drop matters.

Using new technology such as lasers to measure the snow also means improved water forecasts for farms and cities, and even positive benefits for renewable-energy production.

“This really is the holy grail for snow geeks,” said Gehrke, the chief snow surveyor for the California Department of Water Resources, of the new method.

This really is the holy grail for snow geeks.

The new approach is called an aerial snow survey. And it’s run by NASA’s Jet Propulsion Laboratory, in partnership with state and local agencies.

In a place with water issues — California has those in both wet and dry years — this project is a big deal because it greatly reduces that margin of error to below 3 percent.

“We didn’t expect it to be that good,” Gehrke said. “It’s more or less a guarantee.”

That’s important for managing the state’s limited water supply: in terms of releases from reservoirs, generating hydroelectric power and salmon restoration projects along rivers, such as the San Joaquin River north of Fresno.

Even in a diminishing snowpack, knowing absolutely how much is up there allows you to manage it better,” Gehrke said.

Since at least a third of the snowpack is at elevations above where surveys and sensors occur, this project is critical for understanding where the state’s water supply stands, he says.

The new way is NASA scientist Tom Painter’s brainchild. The principal investigator for the Airborne Snow Observatory at the Jet Propulsion Laboratory in Pasadena says this approach would prevent “those kinds of forecasts with errors of 37 percent or more.”

Painter says a way to visualize the project is by comparing a TV screen with only a few pixels to one with all of them lit up. “It’s kind of the mature phase that we have not yet been at,” Painter said.

It’s kind of the mature phase that we have not yet been at.

Under Painter’s guidance, NASA wants to map the entire Sierra Nevada snowpack and landscape; only about 40 percent of the range is mapped now.

Painter says it’s crucial that the project expand because, if California doesn’t adopt some new way, we’ll be vulnerable now and in the future.

“We’ve been really lucky that the measurements and technology line up,” he added.

This is how it works: A plane equipped with a device called LIDAR, or light detection and ranging, flies over the range, shooting out laser pulses to detect how deep the snowpack is and how much water is in it. An imaging spectrometer on board detects albedo — the ratio of light reflected off snow — which helps determine when it will melt. Knowing when runoff will take place is important for managing reservoirs, especially when water is scarce.

“It has two laser sources situated within the unit itself,” said Kat Bormann, one of the NASA scientists who work on the plane in Mammoth. “We can push out 800,000 points per second with this unit.”

The project got its start in the Tuolumne River Basin — that’s where Hetch Hetchy is, the reservoir that supplies water to San Francisco. Wes Monier, with the Turlock Irrigation District, says the aerial data helps his agency guarantee growers how much water they’ll receive in years of abundance and conservation.

“Now we know exactly what we need to release,” said Monier, whose district serves 5,500 farmers over 150,000 acres. “We are paying for a program that is providing some enlightenment.”

A flyover costs around $100,000 for a small river basin. “Yes, it’s very expensive, but it gets you a complete picture of the watershed,” Monier said. He added that the data from aerial snow surveys will help farmers keep producing — and turning a profit —  as the climate changes.

This matters because warming temperatures may make it hard for farmers to grow the same crops they’re farming today. A recent University of California study suggests that, by the end of the 21st century, it may make it difficult for the state to even support some of its main tree crops due to climate change.

The aerial surveys are part of a pilot program in its fifth year. It hasn’t gone statewide yet, And today includes the American River and San Joaquin River basins, plus others. The Friant Water Authority — which manages the San Joaquin River — is funding a three-year test. Last year, it helped prevent flooding on multiple reservoirs. 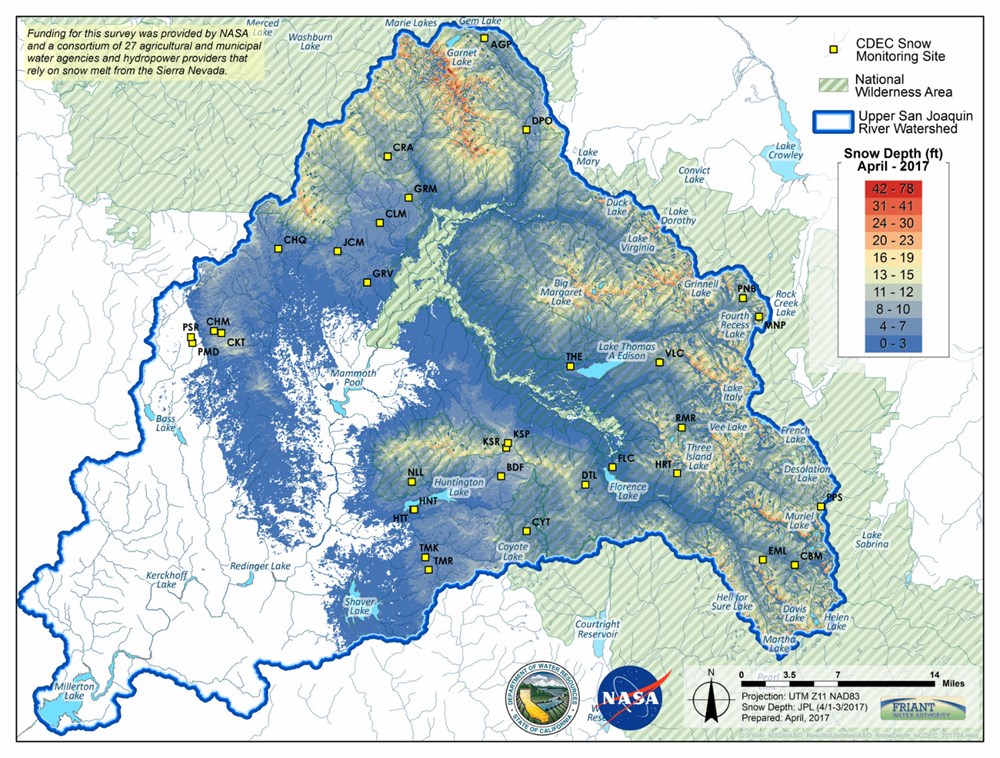 It is an effective way of adding new storage capacity to our reservoirs by allowing them to operate earlier and with more confidence,” said Jeff Payne, director of water policy for the Friant Water Authority.

His district is leading the charge to scale this project statewide. Payne says “water agencies see the value in this,” but a question remains: “Who should pay?’” Payne added.

A moment took place like this in the ’70s, when the state decided to finance California’s existing snow-sensor system. Snow-surveys have been conducted since 1909 and in 1929 a statewide survey-program began. During the height of data collection in early April about 280 surveys are taken.

The groups involved today are trying to figure out ways to get the program from a NASA research project and turn it into a commercial enterprise.

Doing so will take a huge education campaign: convincing state leaders about the program’s value, determining how it overlaps with other state goals and trying to figure out what the right private-public partnership is to get it funded.

It could get bankrolled through legislation, through the state budget or mandate as early as 2019. Currently, all the data collected — about one terabyte per flight — is processed and sent to NASA out of one office near Mammoth. But to map the entire Sierra may take other facilities and multiple planes.

We have an 18-month horizon to get this thing to take flight.

“We have an 18-month horizon to get this thing to take flight,” Payne said. “It’s the state’s responsibility to understand how much water exists in the state and how to manage it.”

“The value of this program is really understanding how to use the existing infrastructure without having to build new infrastructure,” Payne said.

It could also give agencies generating hydroelectric power knowledge about exactly when snow will melt, which means they could start producing energy weeks earlier.

This is a pivotal moment for California, Payne says, if we want to have a clear understanding of how much water is in our snowpack.

But even though this new technology is way more accurate, they’re still going to keep doing it the old-fashioned way until this proves itself.