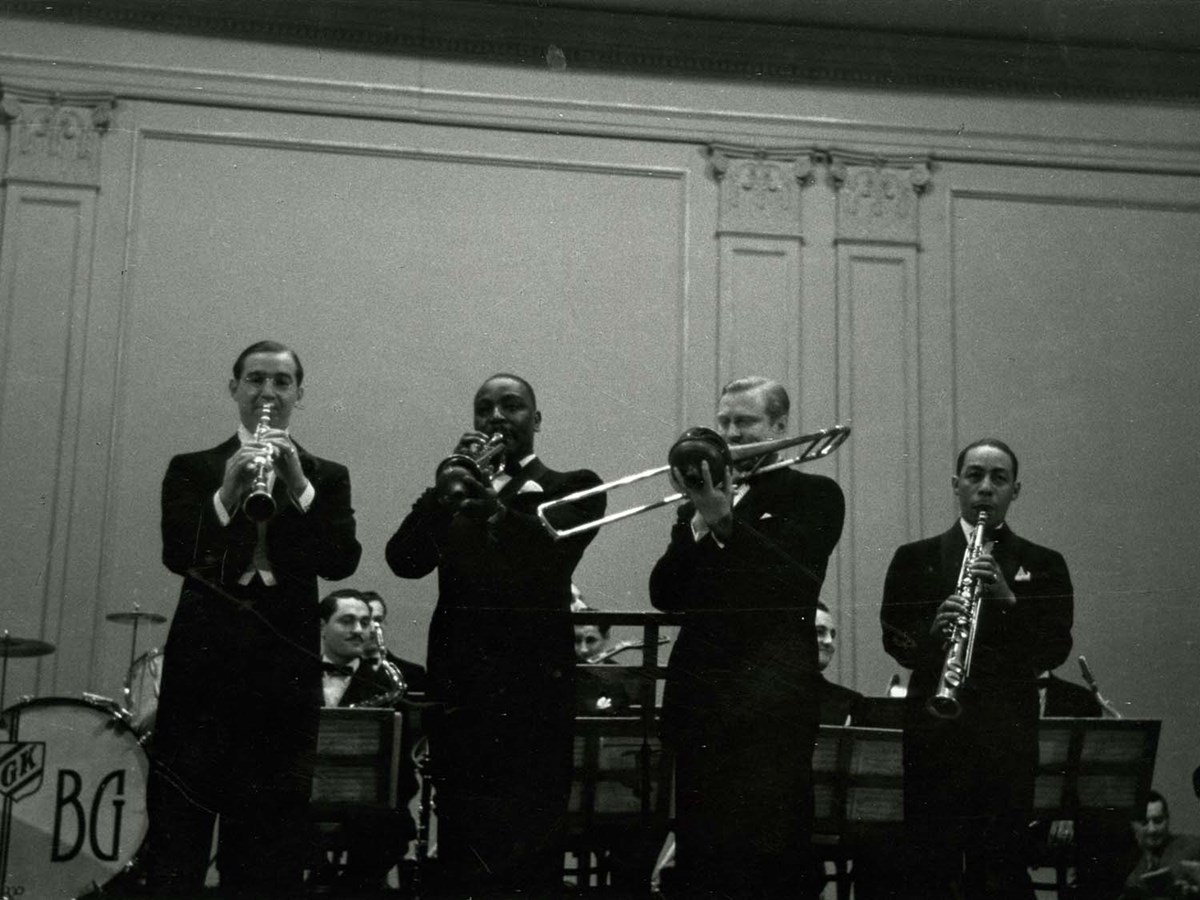 Now that Benny Goodman’s night at Carnegie Hall is largely beyond the sentimental gravitation of nostalgia and no one is left alive who can speak of it from memory, it runs the risk of becoming small. We therefore need new instruments to fix the actual size and consequence of its impact in our imagination.

Fortunately, there may be comparable parallels closer by. Though they are mirror images of each other, Woodstock may provide a useful measurement of magnitude, and one that illuminates the very different cultural ambitions and agendas of the jitterbugs of the ‘30s vs. the baby boomers of the ’70s. But each event symbolized a critical moment of reckoning. For the citizens of Woodstock, the goal was largely downscale as an educated generation, pampered in prosperity, used music to abandon material comforts in pursuit of an atavistic primitivism. For the jitterbugs – later promoted to the rank of The Greatest Generation – they faced the Great Depression when there were few material comforts to fuss over and college degrees were scarce. For them the trajectory was unabashedly upscale: to elevate a music regarded by many as primitive to its proper place on the paneled pedestals of prestige alongside Bach, Beethoven and an emerging Gershwin.

Today jazz flourishes in the sanctuaries of academia, not that much anymore in the bar rooms and ballrooms of its birth. So it is easy to forget that in its youth this music was plagued by an awkward sense of its own low repute. Modern? Yes. But at the core of all 20th century modernism, be it expressionist poetry, cubist art, or serial music, lies the allure of the profane in the face of the pious. Jazz fit that matrix as perfectly and Joyce, Picasso or Stravinsky. Its nocturnal sway suggested subversive linkages between art and morality. It celebrated freedom, emotion, spontaneity, and, most dangerous of all, pleasure. It challenged the ordered Victorian life of the farm, the small town and the church. Yet, there was one difference?  Its impiety was without apparent pedigree and polish. Born on the wrong side of the tracks, for jazz the concert stage was not even a distant dream.

Then in the ‘30s came a procession of astonishing virtuosos, the breakthrough of the swing bands, and the first generation of jazz journalists and critics. This mostly white intelligentsia of camp followers explained it, categorize it, canonized it, and advocated for it. When Duke Ellington went to Europe for the first time in 1933, he played concerts, not dances. When he returned, he started calling his pieces concertos and suites. By the late 1930s jazz was outgrowing its shame and acquiring a taste for respect and status. Just as education has been the traditional ladder up for immigrants, minorities and the poor, technique was to be the bootstrap to legitimacy for jazz. Or so the argument went as posited by such early critics as Otis Ferguson, Winthrop Sargeant and Irving Kolidin.

In an era a great virtuosos, Benny Goodman had it all: disciplined temperament, clarity of purpose, monumental skill. Moreover, among the decisive figures of 20th century popular culture who emerged in a sudden and sensational national epiphany that sustained – Crosby, Sinatra, Presley, the Beatles, a few others – Goodman was unique in one respect. As our great pop idols go, he possessed no apparent personal charisma or sexual magnetism. Yet his power could inflame an audience. Three days before his Carnegie Hall debut, “Hollywood Hotel” opened a few blocks south at the Strand. Goodman could “not so much as poke his clarinet into camera range without producing an ovation,” the New York Times fretted. But that’s where the charisma was kept. Goodman’s power was not personal. It was manifest purely through his astounding musicianship. This made his name the ultimate clincher in any argument over the entitlement of jazz to stand among the great masters of the European concert stage.

Legitimacy is ultimately an issue of perception. It is confirmed upon art in many ways. One is space. Consider for a moment a trash can full of garbage. In an alley behind a garage among other trash cans, it is what it is. But imagine it sitting alone in the center of white room in a museum in mid-town Manhattan. Suddenly that same trash becomes something more, an objet d’art to be seriously considered, appraised and judged. What does it actually mean? Who knows? But the space in which it sits has authorized and empowered it to become art. Carnegie Hall had precisely that power in 1938.

Behind the authorizing power of space lies the authority of those who preside over the space. Hierarchies of culture are created by arbiters who say what art is, and what art belongs where. In the case of Goodman, the arbiter in question, Sol Hurok, was widely regarded as the reigning impresario of New York high culture. “Sol Hurok Presents….” was an elite and bankable credential that now applied to Benny Goodman’s swing.

If the idea originated as a publicity stunt, as legend has it, maybe we should not be too flip about publicity. A great publicity stunt is more than a contrived media event. At its best, it can be a little work of art onto itself. It senses related but unspoken urges that are circulating invisibly. It distills their essence into a flash point event that becomes irresistible to the press and public. The secret of a great publicity stunt is assembling the right symbols and staging them when the time is right. In January 1938 the time and the music were right. As if to italicize the point, Goodman spent much of the first half of the concert tracing the rise of jazz from the Honky Tonk to the big time. And then played the Mozart Clarinet Quintet on his radio show two days later. Quod erat demonstrandum,

It may seem hard today to imagine Benny Goodman as controversial; harder still to grasp the reasons. Even so heroic an act as breaking the color line in American music passed mostly without comment. But taking the stage of Carnegie Hall was another matter. "Two extremes of opinion, both mainly inspired by snobbism, are most to the fore," the Times reported. "The first is held by those who, unable or unwilling to see any merit in swing, regard it as an unregenerate racket whose sole functions is as an outlet for the uncouth energies of the proletariat; the second, by the cultists, who exalt swing to supreme artistic heights…. self-appointed guardians of public morals see in swing neither uplift nor inspiration, but only undisguised eroticism and rampant vulgarity. Spenglerites, no doubt, hail swing as a fitting dance macabre for a society tobogganing to its grave." Western civilization, be warned.

When Goodman found himself occupying this enclave of European extra-territoriality – this space sanctified by Beethoven, Mozart and Bach and personally baptized by Tchaikovsky himself in 1891 – it became an immensely symbolic event because the space itself was symbolic.  In a time when David Sarnoff felt ennobled by bringing the elite NBC Symphony to the masses in 1937, Goodman turned that notion on its head and brought the masses to the elite. Good music didn't have to trickle down from the heavens. It could rise up from below and assert its own terms.

When Goodman commemorated the 30th anniversary of the concert with a private reunion in his New York apartment in 1968, it produced unexpected front page news nationwide the next day and a commemorative essay by George Frazier in Esquire soon after. On the 40th anniversary Goodman returned to Carnegie Hall with a big band in a concert that became one of the hottest tickets in America. On the 50th Bob Wilber recreated the original concert in Carnegie Hall as Benny’s daughter, Rachel, and brothers Harry and Gene sat beaming in the orchestra section. A decade after that Columbia Records released the complete 1938 concert for the first time. This year Jazz at Lincoln Center marks the 80th anniversary in January.

The famous 1938 concert remains a milestone event that has not become small. Benny Goodman made the American concert stage safe for American music. It was act of Jacksonian democracy, New Deal Style.