Number Of California Patients Fighting Insurance Denials Is Up, Cases Nearly Triple. Why?

Nancy Fellmeth keeps a 5-inch binder of insurance paperwork in her Northern California living room. Documents about her adult son’s autism treatment poke out from the sides. Some are denial letters from her insurance company, others are grievances she’s filed. All of them are stressing her out.

“Here it says that it’s been found not medically necessary, and they give you all of these reasons,” she said.

She’s been going back and forth with Blue Shield since April, when the company said it would pay for fewer hours of her son Chris Fellmeth’s applied behavioral analysis, or ABA. It’s a therapy that teaches communication and life skills through a step-by-step reward system.

Blue Shield said it covers ABA when they deem it medically necessary based on “recent and relevant scientific evidence.”

Now 26, Chris Fellmeth has been receiving ABA since age three. It’s helped him learn to speak, read people’s emotions and communicate his needs in a way he wasn’t able to as a child.

In the denial letters a health plan-associated physician, who has never treated Chris Fellmeth, cited his progress as the main reason for scaling back the treatment.

Nancy Fellmeth concedes that her son has made marginal improvements, but argues that he still needs a high level of therapy to continue moving forward.

“Autism isn’t like another kind of medical disorder,” she said. “It doesn’t resolve. You can’t fix it, like a bone. It’s something that’s lifelong.”

Nancy Fellmeth is one of thousands of Californians battling with insurance over paying for treatment. A Capital Public Radio analysis of data from the California Department of Managed Health Care found that the number of contested denials handled by the department has nearly tripled over the past five years — from roughly 1,500 in 2012 to more than 4,200 in 2016.

The department said the increase is because of a jump in the number of insured Californians during that time; the state’s uninsured rate has steadily declined since the Affordable Care Act rollout in 2014.

But enrollment in department plans only increased 38 percent during the five-year window, while the number of cases about denials jumped 175 percent.

Liz Helms is executive director of the California Chronic Care Coalition, a patient advocacy group. She also runs My Patient Rights, a website where people share stories about treatment denials. She said more people are getting denied services.

“There’s so much confusion going on right now at the federal level, I think that’s had an effect,” she said.

“Right now, there’s so much turmoil and so much uncertainty, it’s a real hard time for a lot of people to get through, ” she said.

Charles Bacchi, president of the California Association of Health Plans, said he couldn’t think of a specific reason complaints would be at a high.

But he said that when a new service is introduced, there are often differences of opinion between patient and provider around what the benefit is and how it can be used.

So how do those disputes get resolved?

It starts with the insurance plan. When an insurer denies or modifies a patient’s treatment, the patient can file a grievance directly with their insurer.

If their insurer doesn’t respond within 30 days — or if the patient is unsatisfied with the decision — they can take their case to the Department of Managed Health Care.

Based on a form submitted by the patient, department staff decides whether the case qualifies for an independent medical review. If it does, a physician reviews the patient’s documents and all relevant scientific research.

Elizabeth Landsberg, deputy director of the department, said this system is a crucial safeguard.

“A health plan may make an initial assessment, and the law requires they make a determination based on medical criteria about the particular condition that the patient has,” she said. “But it is important to have that opportunity to have a fresh set of eyes.”

The silver lining of this insurance battle is that 69 percent of people who apply for an independent medical review get the service that was originally denied, either because their plan reverses the decision or the review overturns the plan’s denial.

Helms said that’s why it’s so important for patients to fight for their treatments.

“They do have a voice, and their voice really matters,” she said. “Who else is going to advocate for them if they don’t start doing that and asking for help to begin with?” 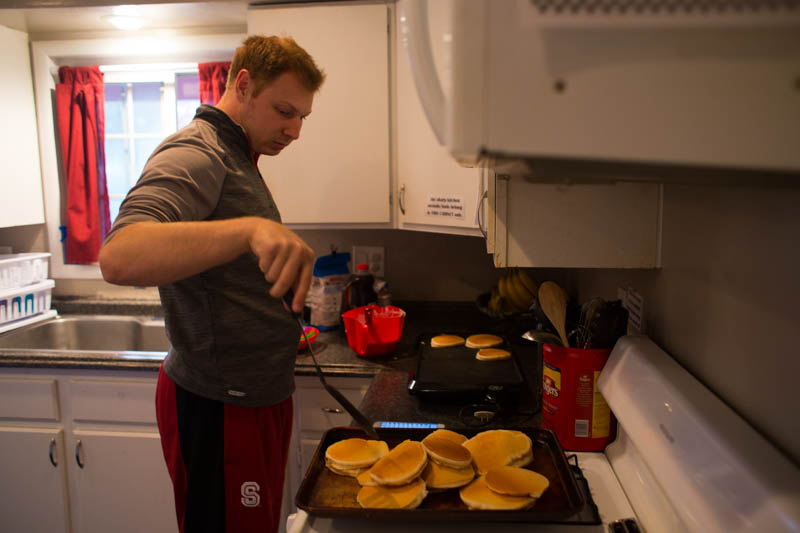 Chris Fellmeth is able to volunteer in a daycare kitchen as part of therapy he receives for his autism. (Andrew Nixon / Capital Public Radio)

As for Nancy Fellmeth, she’s becoming frustrated with the process. She’s appealed to her insurance company for months, and in October they cut additional hours from the therapy.

She said her son can only go to school, do groceries and volunteer in their neighborhood because he’s learned to communicate through ABA.

But without continued practice, he won’t be able to move toward self-sufficiency or even maintain the skills he has, she said.

“This is the only way he learns — is breaking these things down into these very simple steps, and drilling it a 100,000 times — not literally, but a lot,” she said. “That’s why you need a lot of of hours.

“Because for kids with autism it takes a lot of practice.”

Curious how to file an insurance claim? We put together a guide detailing the steps to follow.

Nancy Fellmeth runs a Sacramento-area group called Families for Early Autism Treatment. She encourages any families struggling to get autism services covered to contact her at askfeat@feat.org or 916-303-7405

Find stories from other people who have been denied health care services at MyPatientRights.org