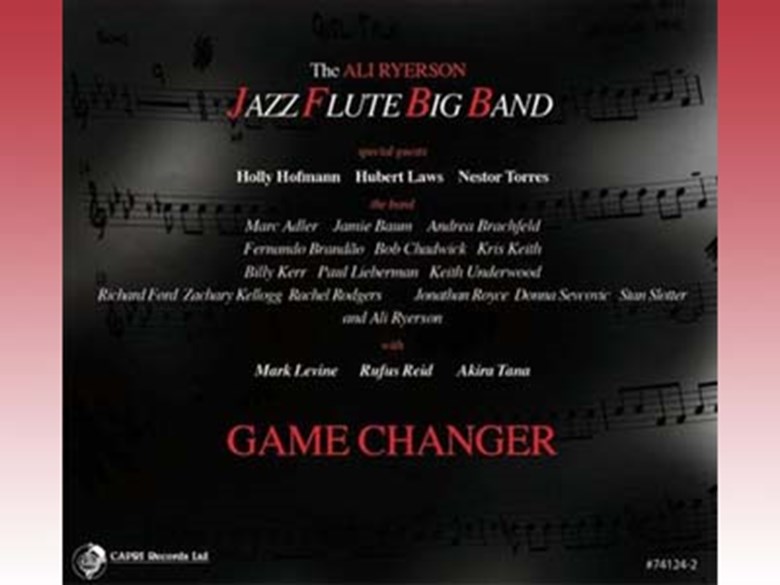 Listen for Ali Ryerson: Game Changer, now in heavy rotation on Capital Public Radio Music’s Excellence In Jazz and JazzStream.org and listen to Ali’s comments (above) on the making of Game Changer.

Thanks to Evan Matsler, co-producer.

Ali Ryerson’s new CD is appropriately titled Game Changer. This album could do for the jazz flute what John Coltrane’s 1961 recording of My Favorite Things did for the soprano saxophone – elevate the instrument to a whole new level of acceptance and recognition.

This recording is both excellent and exceptional on many levels. Ali assembled an incredible front line of flutists, all of whom checked their egos at the door. The rhythm section (Mark Levine, piano; Rufus Reid, bass; Akira Tana, drums) fits the soloists like a glove.

The arrangements of jazz standards such as “Daahoud,” “Ana Maria,” “Stolen Moments,” and “Con Alma” are reworked with grace and inspiration by Mark Levine, Mike Wofford, Bill Cunliffe, and other pros, with a sensitivity to enhancing the presence of all star soloists such as Hubert Laws, Nestor Torres, Marc Adler, and Paul Lieberman.

Ali, who has been active as an educator with the National Flute Association and at the Hidden Valley Music Seminar every summer in the Carmel Valley, brings the flute front and center on this word class offering. The CD is issued on the small but potent Capri label.