Jim Peterson was among an estimated 18,000 people cheering. He's from Bellingham, Washington and has been driving his white 1992 Acura Integra all over the west coast following the Sanders campaign.

Well, it was white before Peterson asked a graffiti artist to paint Bernie 2016 on the hood and then had a friend paint flames on the sides.

Two weeks ago, Peterson was at a Sanders rally in Salem, Oregon.

"Somebody walks up to me and says you should let people start signing your car," he says. "So, I went and got some pens and, in about two weeks, I have about 10,000 signatures on my car." 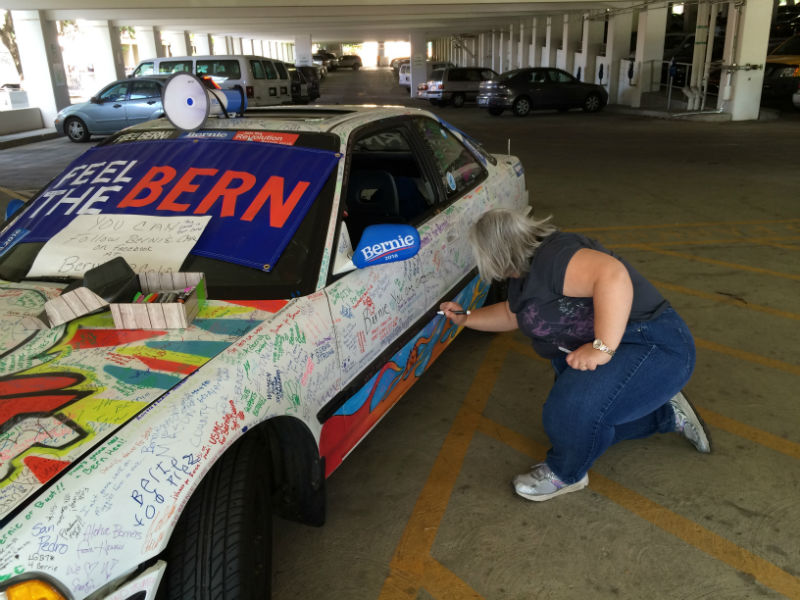 Thousands of well-wishers have sent messages to Bernie Sanders using an unusual vehicle to do so -- a 1992 Acura Integra, owned by a Bellingham, Washington Man. Bob Moffitt / Capital Public Radio

Peterson says his biggest wish, besides a Sanders win, is that the candidate signs the car.

No campaign promises have been made in that regard.

Most of the crowd were Sanders fans but some are still undecided. Zoe Ehlers is a UC Davis freshman. She wants more than promises from Sanders. She wants proof.

"I know he talks the talk and everything," she says. "If there's some sort of proof of what he's going to do, some sort of plan set out for how he'll execute everything he says he'll do."

Sanders' proposal to tax Wall Street investments and use the money to provide free college education was met with cheers by a crowd that was overwhelmingly students.

Many also cheered Sanders' pledge to protect the environment, change the federal classification of marijuana, provide a path to citizenship for undocumented immigrants, and to raise the minimum wage to $15 an hour. 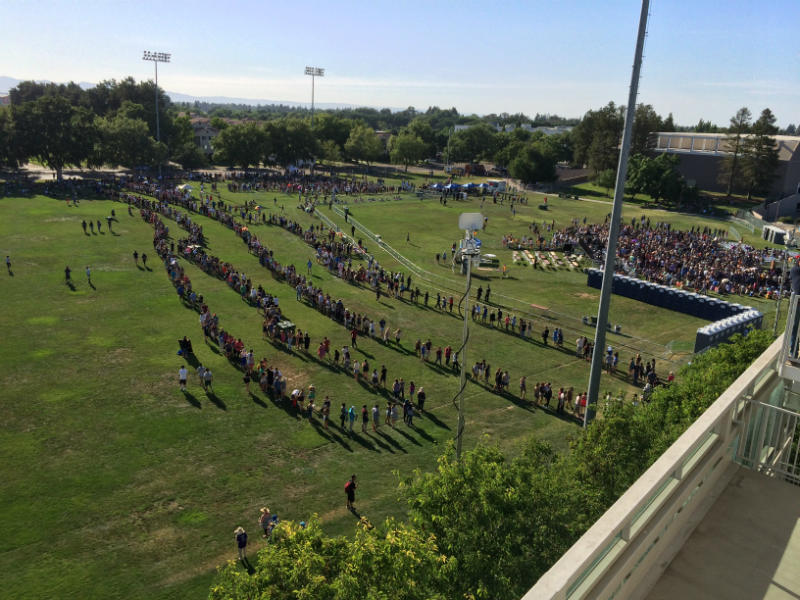 This was the line at 6 p.m. to get into the Bernie Sanders rally. The vast majority of about 18,000 people gained entrance. Some chose to get out of the sun and sit in areas under nearby shade trees to listen from there.  Bob Moffitt / Capital Public Radio

California's 475 Democratic delegates will be awarded proportionally to the popular vote next Tuesday. Sanders trails Clinton by about 270 delegates.

Sanders is scheduled to appear Thursday morning in Modesto and Thursday afternoon in Chico.