(AP) — A police officer who had been on the job only a few weeks was shot and killed by a suspect who opened fire as she was investigating a three-car crash, authorities in Northern California said.

Police officials said Officer Natalie Corona, 22, was shot after responding alone to a traffic accident shortly before 7 p.m. Thursday in the city west of Sacramento. Corona was taken to UC Davis Medical Center in Sacramento, where she later died.

Friday evening Davis Police Chief Darren Pytel said there was still no motive for the shooting, but that "This clearly looks to us like an ambush."

Christian Pascual, one of the drivers involved in the three-vehicle crash that Corona was responding to, says the gunman fired from behind him and then walked off appearing to shoot at others at random. Police have not said anyone other than the officer was shot.

Pascual told The Sacramento Bee that the gunman fired so closely to his right ear that he couldn't hear properly the morning after the Thursday night shooting.

He says he didn't believe the shots came from someone in one of the crashed cars.

Pascual says he had handed over his license to Davis police officer Natalie Corona when he heard the gunshots.

He said that he ducked and when he looked up, Corona was on the ground and the shooter was "shooting at what looked like random people to me."

Doroshov said Corona was very involved with the community, including volunteering with the department before she became an officer.

"She just had a very caring personality," he said. "The department did a big donation drive with the fires up in Paradise and I know she took a very active role on that."

Our deepest condolences to the family of Officer Natalie Corona and to our friends at the Davis Police Department!
Thank you all for the messages to our law enforcement community! pic.twitter.com/N8a9KBeAb3

Gov. Gavin Newsom ordered flags at the state Capitol to be flown at half-staff.

"We join all Californians in mourning the loss of this courageous officer and extend our deepest condolences to Officer Corona’s family, friends, and coworkers," Newsom said in a statement.

Police have not determined what prompted the attack.

Following the shooting, police issued a citywide shelter in place order as officers from throughout the region searched for the suspect.

Police spent hours trying to coax the suspect out of a home about a block from the shooting scene, using floodlights and commands on loudspeakers for him to emerge with his hands up. At one point they sent in a robot and ignited flash bang grenades, the Sacramento Bee reported.

Officials announced early Friday he had been found dead inside. 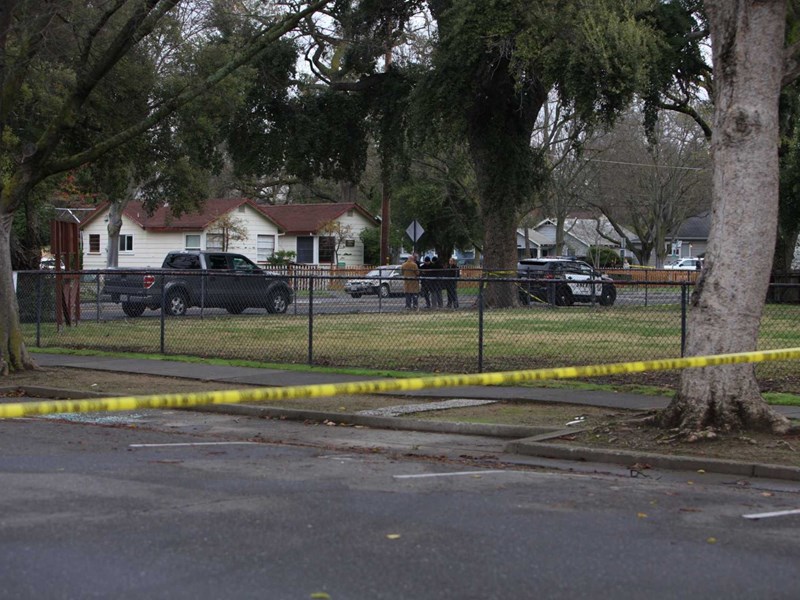 Family members and fellow officers say Corona was very passionate about law enforcement. An image she posted to her Facebook page in 2016 shows her in long, blue dress and waving a "Thin Blue Line" flag, a symbol for police officers who have died in the line of duty.

"It really touched her with a lot of the police murders that were done," said cousin Emily Gomez said. "She felt very strong about that and about protecting the people behind the badge."

Before Corona entered the academy, the Davis Police Department ran out of funding for the paid position she had been in. She didn't care; she showed up to work as a volunteer, Pytel said.

"She was a rising star in the department," Pytel said. "She just worked like you can't believe."

She was the first Davis officer killed in the line of duty in six decades.

The last Davis officer killed was Officer Douglas Cantrill, according to Doroshov. Cantrill was killed in the line of duty in 1959.

"But that was the last time," Doroshov said. "So, you know, this is a department that's not really used to that."

Davis resident Jim Sullivan was downtown Friday to thank officers on duty at the scene. He said he was shocked this morning to hear about Corona's murder.

"I was sitting on my couch last night and I heard the sirens go by and I thought, this is Davis, it's a minor deal," he said. "But to learn she lost her life ... it's heartbreaking."

Corona is the second officer killed in California in the past two and a half weeks.

Cpl. Ronil Singh, 33, of the Newman Police Department was shot to death Dec. 26 after he stopped a suspected drunk driver.

Gustavo Arriaga Perez, also 33, was charged with the murder. Authorities said Perez Arriaga was in the country illegally and was preparing to flee to Mexico when he was arrested. That killing rekindled a debate over California's sanctuary law that limits cooperation by local officials with federal immigration authorities.

There will be a candlelight vigil for Corona in Central Park in Davis at 6 p.m. on Jan. 12. 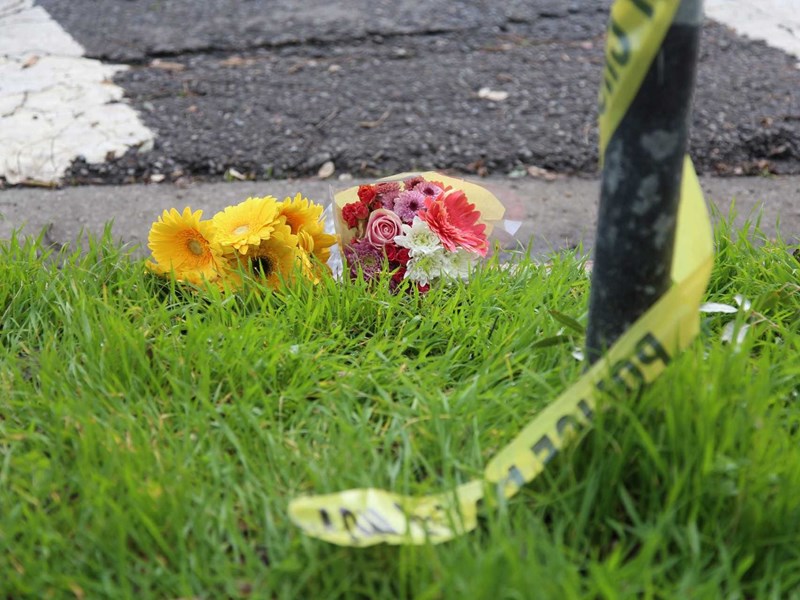 Flowers were laid on the ground at the scene where Davis Police Officer Natalie Corona was shot and killed on 5th and C streets on Jan. 10, 2019.Andrew Nixon / Capital Public Radio