The roar of multiple engines and the drop of thousands of gallons of orangish-pinkish fire retardant are really good sounds and sights if you're a firefighter trying to hold containment or if you’re someone who lives nearby, anxiously watching a plume of smoke.

Cal Fire's stable of tankers include many converted military bombers with 1,000 to 3,000 gallons of retardant, ready to provide relief to those on the ground.

But the retardant drop is the last step in the process.

Before the tankers are given the okay to fly to a new fire, a request for air support must be submitted to the Northern or Southern California Cal Fire air operations centers, which then calls on a two-person air attack crew to scope out the fire.

“We determine where we want the drops,” said Cal Fire's Matt Houston, part of a Redding-based crew.

Once in the air, Houston is responsible for communications with engine crews, bulldozers, and the operations center to relay information about the size, direction, threat and behavior of the fire. He also identifies hazards like trees, power lines, and steep terrain and only then, if the visibility is good enough, will he call for tanker support.

"Once the tanker has the drop location, then we'll clear the line and we just notify the ground resources that a tanker drop's coming in, the location that it's going to be taking place,” he says. "Then we clear the tanker to maneuver." 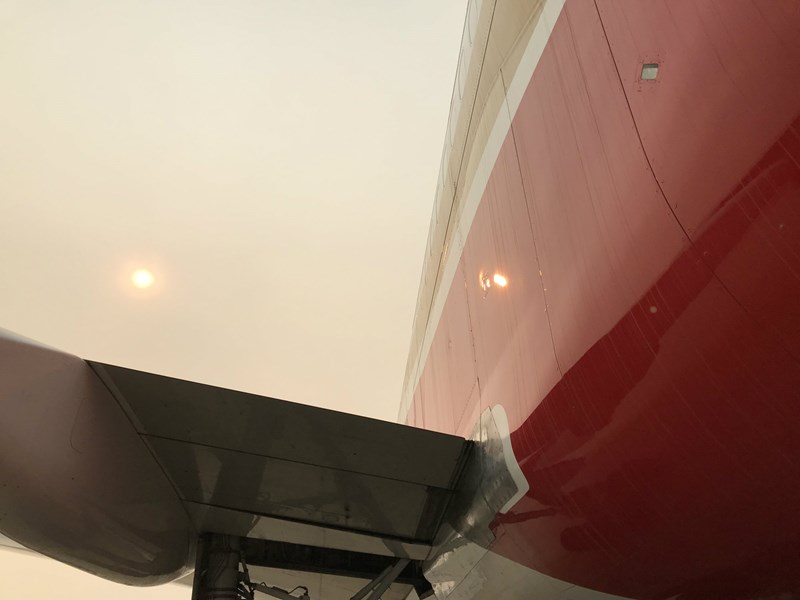 The Global SuperTanker can drop about twice the volume of retardant compared to a DC-10. The SuperTanker also costs about $16,000 an hour to operate.Bob Moffitt / CapRadio

One of the tankers ready to respond is the privately-owned 747 Global SuperTanker. It's temporarily based at McClellan Airport with a capacity for 19,200 gallons of retardant and water.

Marcos Valdez is one of the SuperTanker pilots. He's been targeting the eastern flank of the Camp Fire since Saturday, under the guidance of a pilot of a lead plane.

"He'll describe the target for us," Valdez says of the lead pilot. "It's all a visual description. It's all out of the window. We don't use GPS."

The lead pilot identifies the beginning and the end of the drop.

“(He'll say) things like, 'You see this tree that looks a little more red than the rest of the tree?' I say, 'Yeah, I see that tree.' He says 'I want to start right on top of that tree,’” Valdez says.

Identifying the end of the drop zone follows the same vein.

Just as the target starts to dip below the nose of the aircraft, Valdez hits a tiny button on the steering wheel.

"It's a button about the size of a pinhead,” he says. “That button won't do anything until the drop system operator has armed the red 'arm' button back there."

It cues a system that uses pressurized air to push retardant out of one, two or four nozzles under the jet. Valdez likens it to a syringe.

"We can deliver the fluid like a light rain or have it come down like a tornado rain, a hurricane rain," he says.

That's if the plane is allowed to fly. Crews can be grounded because of winds that make the plane unstable or smoke that prevents the pilot from seeing.

"It's frustrating sometimes for us,” Valdez says. “It's frustrating certainly for the folks on the ground who are trying to get that support. It's frustrating for our citizens who are saying why isn't this asset up and flying. But, there's a lot of things that have to go right before we can go out and fight that fire."

Of course, once the tankers unload, they must reload. Much of the northern air operations in Redding is staffed with retirees like Bill Bobich.

They don't do retirement well.

"I don't want to sit around the house," Bobich says."I like coming. We all do or we wouldn't be here."

After three decades with the US Forest Service and Cal Fire, Bobich is a mixologist of sorts. Only this cocktail is the consistency of runny Jell-O and contains monoammonium phosphate, water, diammonium phosphate and performance additives that include the bright orangey-pink dye. One of his jobs is testing the retardant for fading. 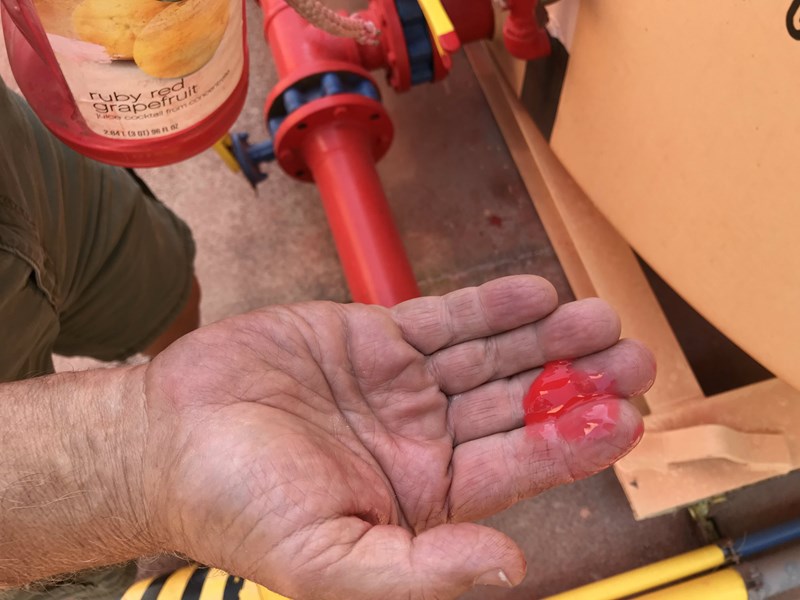 Retardant mix looks like slime up close. It's also heavy, weighing 9 lbs per gallon, which Cal Fire says is one reason it's important to know where it's going to avoid it from landing on firefighters on the ground.

"When the pilots are painting ahead of a fire, they need to see that color,” he says.

There are tanks at the ready with 96,000 gallons already mixed and 300,000 gallons of powder on standby.

During a fire, Bobich and his co-workers serve as the pit crew for the tankers.

"Depending on which way the winds blow, if we're getting a north wind, they're gonna point north and we'll have our lines this way," he says. "We leave pit four differently because there are some airplanes that reload in the front of the wings. We're not supposed to walk underneath them. Very dangerous. We wait to get waved in by the parking tender, one of the firefighters."

Which is when they haul a heavy hose cart to the plane, attach to the aircraft and turn on the pump.

While five of them deliver retardant, three others mix more. And then, the planes are off again to give more relief to firefighters on the ground and hope to the people who live nearby who cheer the pilots on, not realizing others like Bobich and Houston are also to be thanked.